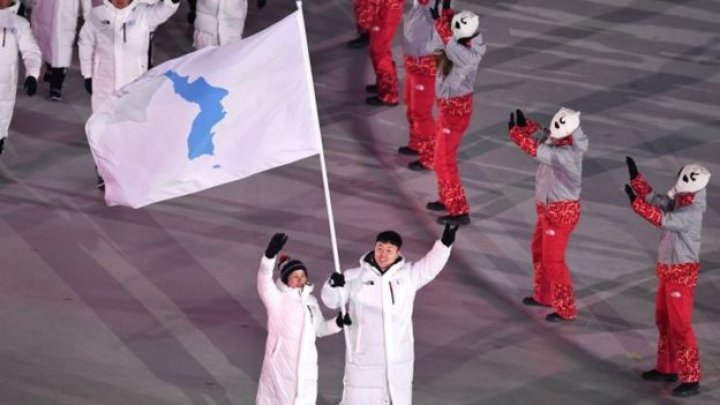 The two Koreas will not march together at the opening ceremony of the Winter Paralympics in Pyeongchang on Friday, officials in the South have said.

The North had wanted disputed islands to be put on a unified flag but the South disagreed.

The two nations marched together under an agreed unified flag at the opening of the Winter Olympics on 9 February.

That had been seen as part of a gradual rapprochement in bilateral ties and the nations later agreed a leaders' summit.

The summit is expected to discuss how to reduce tension on the peninsula.

After discussion with the North, the two Koreas decided not to march together at the opening ceremony," the South's Yonhap news agency quoted the South Korean Paralympic Committee (KPC) as saying on Thursday.

The unified flag shows the Korean peninsula in blue on a white background.

The KPC said the North wanted the South's Dodko islands, which Japan claims, on the flag, saying the omission hurt Koreans.

The South said inclusion would run counter to the International Paralympic Committee's recommendation not to politicize sports events.

The KPC said the two Koreas had decided to respect each other's stance and march separately.

The apparent rapprochement over the Winter Olympics had seen the selection of a joint women's ice hockey team, the deployment of a squad of North Korean cheerleaders and most significantly a high-level Northern delegation that included Kim Yo-jong - the sister of North Korean leader Kim Jong-un.

The charm offensive was hailed by some as a breakthrough in relations but conservatives in the South issued warnings and the US was unmoved in its tough diplomatic stance.