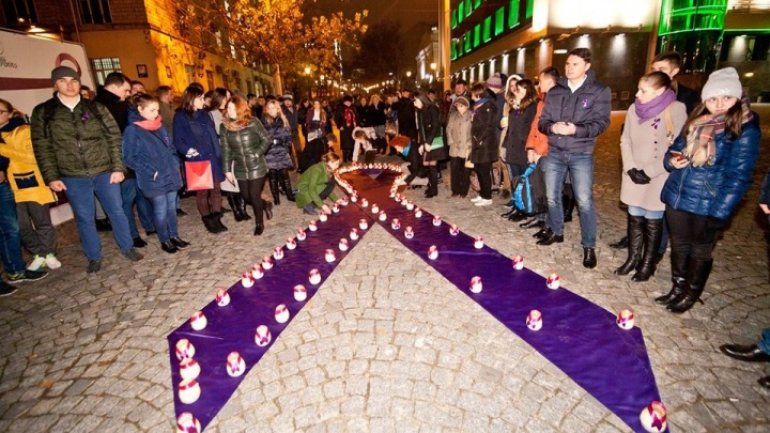 "No to domestic violence!" This was the message given by dozens of people gathered on the pedestrian street in Chisinau.

This way, people came to support the victims of this phenomenon. In a sign of solidarity they lit hundreds of candles, which formed a purple ribbon, the international symbol of the fight against domestic violence.

The event was organized by Vlad Plahotniuc's "Edelweiss" foundation.

Participants in the action called "Street of Lights" sang songs and encouraged women to fight for their rights:

"We came to commemorate those victims who have suffered from domestic violence. I came with the guitar to singing songs that say nice things about women. We worship them in a way."

"I believe it is crucial to raise awareness about this issue which is very, very painful for our society. We do not accept violence as it is."

"Such events primarily sensitizes society. With the help of this kind of events, the population understands that domestic violence is an antisocial phenomenon."

The action was also supported by representatives of many NGOs.

"It was absolutely necessary to join this event as part of the anti-violence center administration. I could not be absent today," said the director of a social center, Valentina Geamana.

The representatives of Vlad Plahotniuc's Edelweiss Foundation say that this event shows to victims of domestic violence that the entire society is with them.

"I came with a message of solidarity and support for victims of domestic violence. Let's send them a message that they are not alone in this fight," said Sabina Grigan.

The action was organized by Vlad Plahotniuc's Edelweiss foundation in the national information campaign "Protected families".

According to data, in the first nine months of 2016 were issued about 700 protection orders to victims subjected to domestic violence.

Most were for protection of women and children - 690. And for men, there were only nine ordinances.

The Day of combating violence against women is marked since 1981.