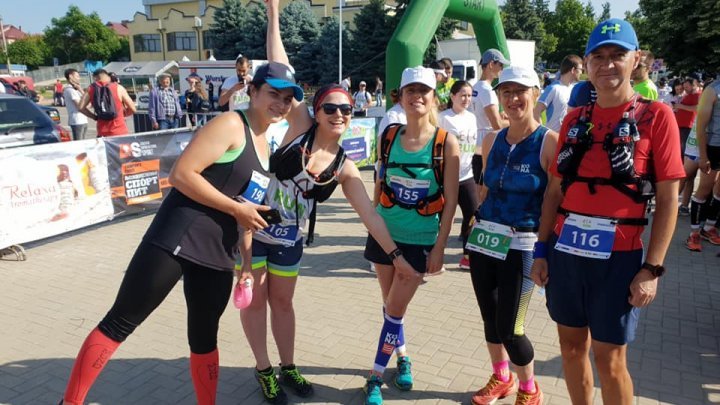 Almost two hundred people participated in the EcoRun race, which took place in Nisporeni. The competition was organized by the Run Moldova Association and the City Hall, on the occasion of the 400th anniversary of the founding of the city.

The participants ran for 12 and 24 kilometers. The competition also gathered athletes from the Netherlands, Italy, Russia, Ukraine and Romania:

"We arrived yesterday, and today we come to the race. Later we will make a trip through Chisinau."

"Our friends greet us in Chisinau, and we decided to come to the competition."

Valeriu Iovschi and Diana Sinic arrived at the finishing line.

"I am very happy to have won, I've not run for ten years, we have resumed the training only for a year," said Valeriu Iovschi, participant in the race.

The athletes say the difficult route organized by the Nisporeni was beautiful, but the hills and the sun gave them great headaches.

"It was the high altitude, the ramp. Plus, it's sunny and must always be hydrated."

"It was a very interesting race with many obstacles, uphill and downhill."

Officials also attended the race. Among the people who promote healthy lifestyle is the mayor of Nisporeni.

"If in family, children is the joy of the parents, for the City Hall, joy is the people who have a healthy lifestyle," said the mayor of Nisporeni, Grigore Robu.

"It's my first official race, I've been training for two months," Secretary of State Mihail Beregoi said at the Ministry of Internal Affairs.

Through such an event, organizers of the EcoRun races want to show people that they can practice sports in Moldovan tourist areas as well.

"It's a nice but very difficult route, there are many hills," said organizer of the competition, Iulian Bercu.

Also this year, such athletic races will take place in Orheiul Vechi - on 25 August and in Cricova - on 6 October.

PUBLIKA.MD reminds that it is a great holiday this weekend in Nisporeni. On the occasion of the 400th anniversary of the founding of the locality, the mayoralty organizes a series of events and concerts with famous artists from both the country and abroad.

Among the most awaited are the famous singer from Romania, Inna, the band Zdob si Zdub, but also the famous Italian interpreter Pupo.

The event will feature a biker show, fanfare music concert, and many surprises for children. And football enthusiasts will be able to watch the final of the Real Madrid-Liverpool Champions League on a giant screen installed in the city center.

In the evening it will culminate with a grandiose firework.
AFLĂ imediat Știrile Publika.MD. Intră pe Telegram