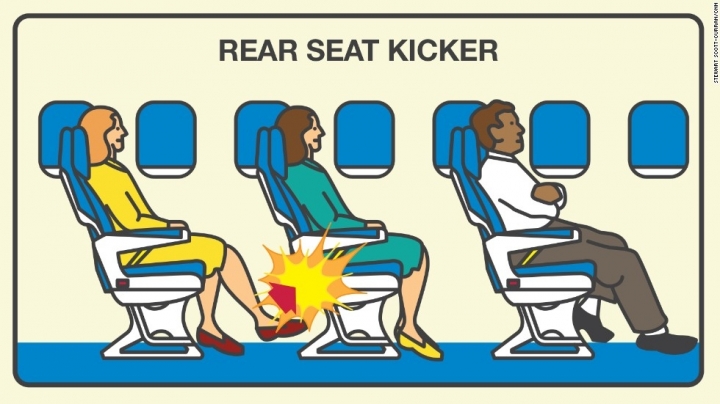 The next time you're battling over an armrest or silently enduring that toddler kicking the back of your seat, remember that it could be worse. Much worse.

Incidents of air rage -- the sort of gob-smacking bad behavior 30,000 feet above the ground that can turn around a plane or get someone arrested -- are increasing, an industry study has determined.

The International Air Transport Association (IATA), an airline industry body, has found that your odds of meeting a true airborne nightmare are increasing. It recently released a report which finds that "unruly passenger incidents" on board aircraft are inexorably on the rise, with a 14% increase in incidents reported in 2015 compared to the previous year.

Most on-board incidents involved "verbal abuse, failure to follow lawful crew instructions and other forms of anti-social behavior," the report found. As much as 11% of reports "indicated physical aggression towards passengers or crew or damage to the aircraft."

Not surprisingly, booze -- and drugs -- play a big part in turning otherwise docile travelers into raging, rule-breaking belligerents. The report finds that alcohol or drug intoxication was identified as a factor in 23% of cases, but adds that in most of these cases, it's consumed prior to boarding.

"Unruly and disruptive behavior is simply not acceptable," Alexandre de Juniac, IATA's Director General and CEO says.
"The anti-social behavior of a tiny minority of customers can have unpleasant consequences for the safety and comfort of all on board. The increase in reported incidents tells us that more effective deterrents are needed."

One simple way to curb bad behavior in the air is to nip it in the bud on the ground, the report recommends.