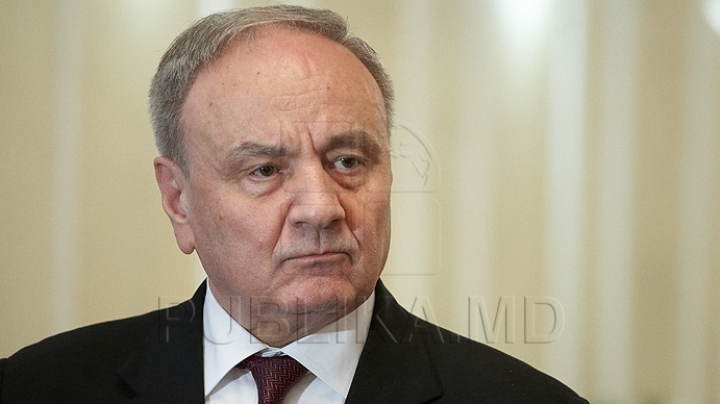 The president Nicolae Timofti has declared during a speech for the National Day of Romanian Language at the Academy of Science in Chisinau that Romanian language is the official language of Moldova, and those who claim that they speak Moldovan language are just splitting the society even more. Nicolae Timofti also said that the change of the article 13 in the Constitution is an obligation of the Parliament, writes deschide.md.

The president also reminded about the events from 1988-1989, when the Moldovan society has entered the path of truth and mentioned the names of intellectuals who fought for the movement of national freedom.

He also said that the change of the article no. 13 of Constitution is an obligation of the Parliament.

“The change of article no. 13 means a gesture of political and legal correctness in Parliament in the regard of fulfilling the decision of the Constitutional Code. Moreover this way is done in a legal country. The continuous use of two names of the same language means the continuous splitting of the society. Who does not understand this, is against the development of our country. We cannot continue the way on the path of untruth. The hesitations of this kind should have been stopped a long time ago. Ethnically we are Romanians, even though we call ourselves Moldovans” said the president.

He also added that he considers himself Romanian, as are all citizens of Moldova.

“In my discussions with the presidents of other countries I always said that I am of Romanian origin, as my parents, grandparents and all who live on this land are. My advice is to not leave the path and to follow the European development vector. We have to have a system of scientific researches and innovations according to the European level, to have a health protection system against the present requests, a professional legal system in which citizens will trust, to put the economy in function. To bring back the faith of citizens in the state, and to be exigent with the political class. We have a lot to do” said Timofti.

Today will take place many cultural events with the occasion of the National Day of Romanian Language. The officials will put flowers at the monument of Stephen the Great and the busts of writers on the Alley of Classics, starting with 10:00.

In the Public Garden “Stefan cel Mare” will be poetry, music recitals, handicraft, ceramics exhibition, and will perform many folk ensembles. In the evening, in the National Assembly Square will take place a concert where many local artists will perform.