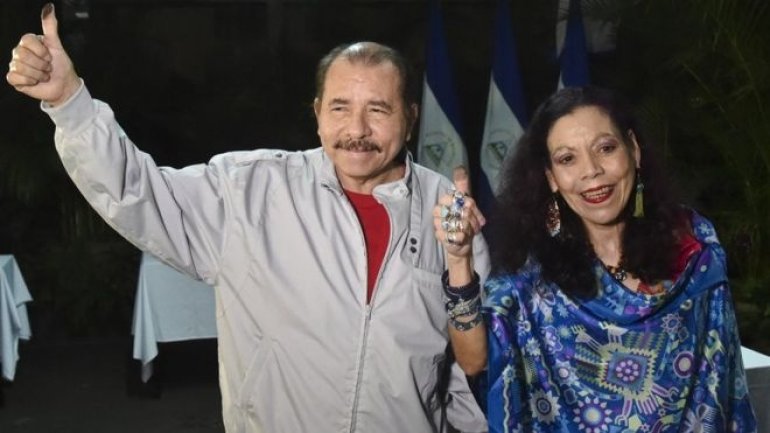 Nicaraguan President Daniel Ortega is heading for a third consecutive term in office after securing more than 70% of the vote in partial results for Sunday's election, according to BBC.

A former left-wing rebel, Mr Ortega is popular in the country thanks to social programmes and economic stability.

He was widely expected to win as he faced no obvious challenger.

Critics accused Mr Ortega of manipulating the political system to stay in power and of smothering the opposition.

The vote was seen as the most one-sided election in Nicaragua since the overthrow of dictator Anastasio Somoza in 1979 - a process that Mr Ortega himself was involved in.

But Nicaragua is sharply divided over the 70-year-old former guerrilla.

Many feel that the elections were a farce, that with this, his third consecutive term, there is growing autocracy in the country and the role of his wife as running-mate is too much of a family affair.

The fact remains, though, that he was the most popular candidate by far.

Overseeing Nicaragua's stable economic growth and the lack of violence compared to the problems of its neighbors El Salvador and Honduras in recent years have cemented him as the best option for many Nicaraguans.

Mr Ortega arrived at the voting station in the capital, Managua, with Ms Murillo just before the polls closed on Sunday at 18:00 local time.

The five other candidates were all minor figures and were unable to present a challenge to the president. Part of the opposition urged a boycott, calling the vote a "farce".

International observers were not allowed to monitor the vote.

Analysts said that Mr Ortega's wife already shares decision-making with him and could become president herself if he bows out - there are rumors about the state of his health - or in the next election.

Nicaragua's economy has grown at double the Latin American average, but the country still needs to attract more foreign investment.

A $50bn plan to build an interoceanic canal across Nicaragua with Chinese investment gained international attention, but there are serious doubts over whether it will ever be built.

The country has been able to avoid the sky-high murder rates of some of its Central American neighbors but it also faces the ever pervasive threat of drug-trafficking.