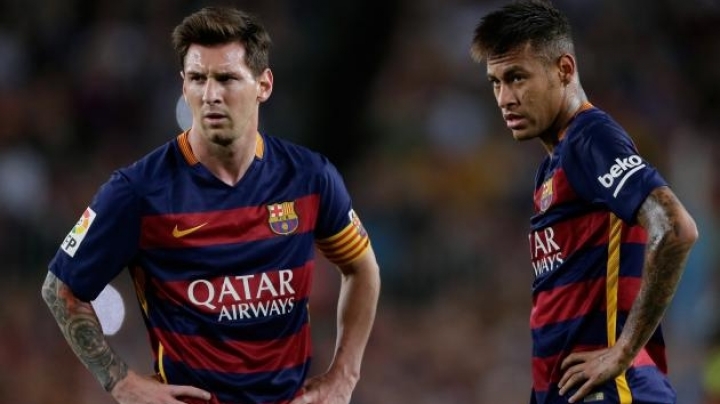 No wonder Neymar declared himself 'Muito Feliz (very happy)' to be staying at Barcelona on social media with the new contract announced by Barcelona on Friday he has taken another huge step towards becoming the club's top-earner and principal figure.

He has signed a new five-year deal that will take him up to 2021 by which time he will be 29 years old, Lionel Messi's age right now, reports Daily Mail.

Neymar will by then have replaced the Argentine as the most important man at the Nou Camp. And after the club added a rolling buy-out clause on his new deal he will be harder to steal away from Catalonia than ever.

'He never presented us with another offer from another club,' said Barcelona president Josep Bartomeu this week. 'But it is true that all Barca players could find clubs that would pay them more.'

That might sound like an astonishing admission but it is a reality of life for Barcelona that they cannot match Manchester and Paris, in purely financial terms.

What they can do is offer the near guarantee of sporting success and despite the suggestion he wanted to step out from Messi's shadow, he was always going to stay alongside his Argentine pal – they have won seven trophies out of a possible nine in the last two seasons.

Neymar's lawyer Marcos Motta originally called the new contract the 'biggest' in football but he hastily corrected himself – it's not the biggest, it's the 'best'.

The fact that City and United, as well as Paris Saint-Germain have missed out on him this time also means that if they want to try again in the coming years it will be even more difficult. His buyout clause immediately rises to 200m euros and it will take another jump to 222m euros in 2017 and a further leap to 250m in 2018.

Neymar's annual net earnings were set at 10.5m euros a season when he signed but a 40m euros payment to his father when he joined the club have since been revealed to be disguised wages for which Barcelona have had to pay a 5.5m  euros fine to the Spanish tax man.

That payment of 40m euros spread across his original five-year deal would have set his real net pay at around 18.5m euros. The new contract is understood to take that net pay figure over the 20m mark but still leave him short of Messi whose net pay is 22.5m euros.

Messi will be the next to sit-down with Barcelona to discuss a renewal of his contract that runs out in 2018.

Barcelona still have no shirt sponsor for next season but president Bartomeu announced on Thursday that they should pass the 670m euros mark for income generated in the 2015-16 season when they finally announce end of financial year figures and they are also confident of striking a 200m euro deal when they sell naming rights on the renovated Nou Camp.