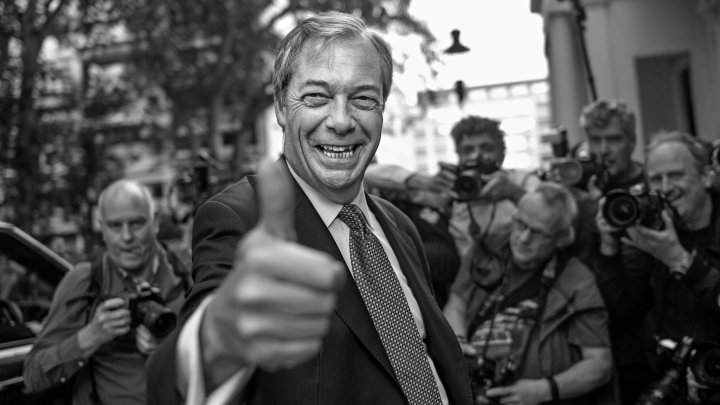 Nigel Farage is the British crisis in human form. His party, the unambiguously named Brexit Party, which is hardly a party and didn’t exist six months ago, won nearly a third of the British vote in the recent European Parliament elections, putting it in first place and driving the shattered Conservative Party into fifth. Long underestimated, Mr. Farage has done more than any politician in a generation to yank British politics to the hard, nationalist right. He is one of the most effective and dangerous demagogues Britain has ever seen, writes The New York Times.

With his last political vehicle, the U.K. Independence Party, or UKIP, Mr. Farage took an assortment of Tory retirees and a smattering of ex-fascists and other right-wing cranks, and welded them into a devastating political weapon: a significant national party. That weapon tore such chunks out of the Conservatives’ share of the vote that the party leadership felt compelled to call a referendum on Europe — which it then lost. Mr. Farage declared victory and went into semiretirement as a pundit.

Now, almost three years after the Brexit vote, he’s back. His timing could hardly be better. After a “lost decade” of declining living standards and flat wage growth, trust in Parliament and the news media is at rock bottom. The Conservatives are disintegrating; Prime Minister Theresa May is on her way out of office, having failed to secure a parliamentary majority for her Brexit deal. She failed because, rather than seeking cross-party consensus, she tried to placate her own hard right and prevent voters from abandoning the party — again. Unable to do so, she has simply hardened public opinion.

A poll in April found that given a choice between remaining in the European Union, and leaving with no deal, 44 percent of Britons support “no deal.” The vast majority of these voters previously supported the Conservatives. But since they are the party of business, they can’t seriously contemplate leaving without a deal. Nor can Parliament.

The resulting stalemate, combined with an election in which the main parties barely campaign, presented Mr. Farage with an easy target. And thanks to his success, there is enormous pressure on the Conservatives to deliver Brexit in October, deal or no deal. Boris Johnson, likely to replace Mrs. May as prime minister, is now pledging to do just that.

The Brexit Party’s campaign was a one-man show. While it has a sophisticated digital strategy, the party has no members and no manifesto, and none of its candidates were democratically selected. It offered only one policy: a “No Deal” Brexit. Its rallies focus on star performances by Mr. Farage, introduced with thundering motivational music. He is a gifted communicator, verbally dexterous, with a sense of humor.

Like many English reactionaries — including Mr. Johnson — he speaks in a nostalgic, “old world” register. He doesn’t talk about taxes or privatization. He talks about unfairness and loss, about the sovereignty supposedly ceded to Europe, immigration and elite cosmopolitans. And he names a placebo solution within reach: Brexit. The great escape. It’s a powerful antidepressant.

It is ironic that Mr. Farage appeals to people who are besieged by precisely the kind of volatile financial capitalism that he champions. He is, like President Trump, that paradoxical figure: the capitalist populist. He made his money as a City trader during the boom years of the 1980s, reveling in its adrenaline-fueled, heavy-drinking culture. He is the Gordon Gekko of British politics. It’s striking, to those who care to look, just how much his agenda is about class interest: He opposes extended maternity leave, raising the minimum wage and reducing the retirement age — anything that inconveniences his nouveau riche confederates. If he had his way, many of his supporters would be working harder, longer, for less money, with less protection. That, indeed, is his Brexit dream: Singapore on the Thames.

Even his racism is class-bound. Mr. Farage’s problem is not just with immigrants, it seems, but with poor immigrants especially: those from Eastern Europe, or Muslim countries, or those with H.I.V. He has said he would be uncomfortable with Romanians as neighbors, but he married a woman from Germany. He hates the European Union because its moderate social legislation and free movement defy what he thinks is a Darwinian cultural ecology through which some rise and others fall.

It is a mistake to overstate his “white working-class” base — UKIP included plenty of professionals and managers — but he has wooed many older, white workers, remote from the center of financial power where he built his career. Some were ex-Labour voters in manual jobs. His offer to them is that, in a society of dog-eat-dog competition, they will not have to compete with foreign workers. This is why the liberal press’s muckraking about his racism and far-right connections, by itself, generally doesn’t work. Far from impeding Mr. Farage, racism is his ticket to success. It puts him on the same side as his poorest voters.

With Parliament deadlocked and the Conservatives nearing their death throes, Mr. Farage has spotted an opportunity: a new political model, inspired by the Five Star Movement in Italy. A “digital platform” that harnesses the free labor of its “users,” allowing them “participation” through content-sharing and online polls, rather than rights. Parliamentary democracy is slow at the best of times, and these are not the best of times. Such platforms, however, introduce volatility to the system. Dropping UKIP, a traditional membership party, he launched something like a venture capitalist start-up, with crowdfunders rather than members, and a chief executive rather than a leader.

Hence, the Brexit Party. Unlike older party models, it doesn’t invest in lasting infrastructure. It is nimble-footed, expert at gaming social media — the stock market of attention. It won the battle for clicks, and made a killing in this election. Such online frenzies are akin to destabilizing flows of hot money, forcing legacy parties to adapt or die. But when Parliament is so weak, its legitimacy so tenuous, they can look like democratic upsurge.

That may be Mr. Farage’s ultimate triumph. The quintessential City trader and apostle of cutthroat competition, he is exploiting our democratic crisis to remake politics in his own image.