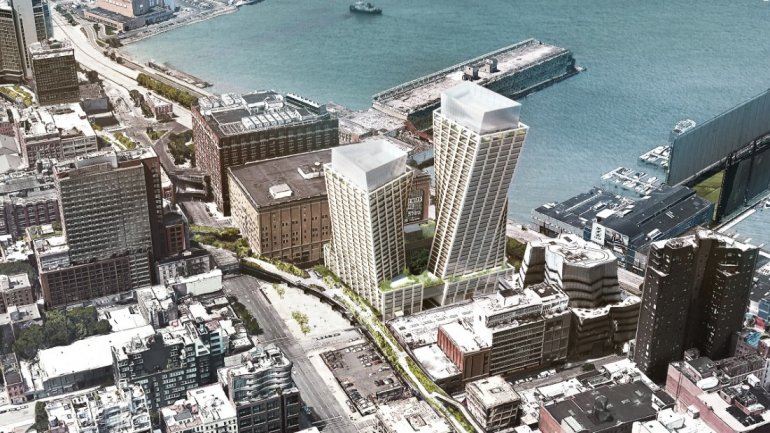 Ingels' first venture in the city - the tetrahedron-shaped Via 57 West building - opened earlier this year, and his design firm is pressing ahead with plans for glass behemoths The Spiral and 2 World Trade Center.

The Bjarke Ingels Group (BIG) has now revealed details for an audacious $1.9 billion project dubbed "The Eleventh" that will see a pair of twisting towers rise above West Chelsea.

The mixed-use buildings will stand 300 and 400 feet tall, becoming the tallest in the neighborhood.

The twisted aesthetic, creating a sense of motion, has a practical function as it allows expansive views of the Hudson river and Downtown Manhattan.

According to a BIG release, the design "draws inspiration from New York City's classic Modernist structures and cultural institutions, while skewing traditional skyscraper geometry with rotating forms that maximize views from both towers."

The rotating effect will be a new look for the city, although it mirrors a similar design for The Grove, a smaller pair of glass towers from BIG in Miami.

The buildings for HFZ capital will not be completed until 2019, but they are already in high demand.

Luxury chain Six Senses Hotels will open its first US location on the site, featuring 137 rooms and a spa across 10 floors of the east tower.

The complex will also host 240 condominium apartments, as well as restaurants, retail and entertainment facilities. Both towers will feature open air promenades adjacent to the High Line park.

Prices are yet to be announced for the apartments, but they are expected to be prohibitive.
AFLĂ imediat Știrile Publika.MD. Intră pe Telegram