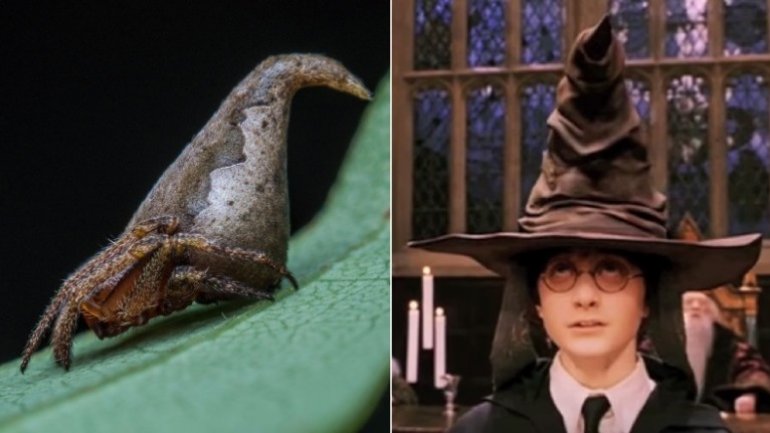 Scientists in India have taken inspiration from J.K. Rowling's "Harry Potter" series of books and movies in naming a distinctive new species of spider.

The spider has been named Eriovixia gryffindori, a nod to Gryffindor house, into which Harry Potter himself was sorted on his first day as a Hogwarts student, according to CNN.

"This uniquely shaped spider derives its name from the fabulous, sentient magical artifact, the sorting hat, owned by the (fictitious) medieval wizard Godric Gryffindor, one of the four founders of Hogwarts School of Witchcraft and Wizardry..." the report from the Indian Journal of Arachnology, said.

In response to the spider's naming, the woman who dreamed up the Harry Potter universe, author J.K. Rowling, tweeted: "I'm truly honored!"

The journal report describes Eriovixia gryffindori as "a small, cryptic, nocturnal araneid which takes refuge in, and mimics dried foliage, during daylight hours."

Mark Elgar, a professor of evolutionary biology at the University of Melbourne's School of BioSciences, described the spider as "probably about half the length of the fingernail on your little finger."

He added that it would eat insects and spiders smaller than itself.

For such a tiny creature, Erovixia gryffindori is attracting big attention online.

The report sums up the discovery as: "(an) ode from the authors, for magic lost, and found, in an effort to draw attention to the fascinating, but oft overlooked world of invertebrates, and their secret lives."

So, move over, Aragog.