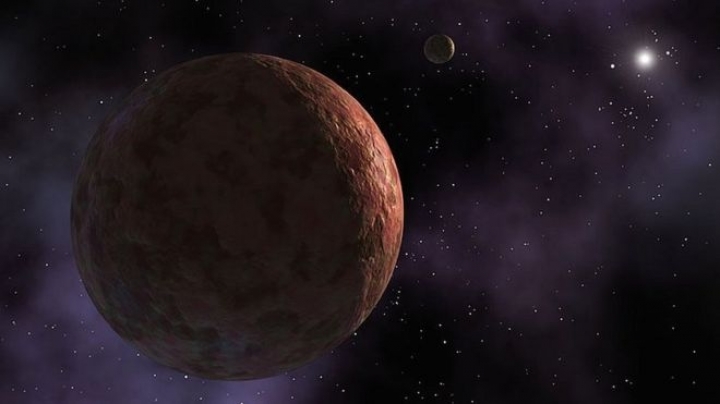 Astronomers in the US have uncovered previously unknown objects in the outer reaches of the Solar System, reports BBC.

They include an icy body with an orbit that takes it so far from the Sun that it is probably influenced by the gravity of other stars.

The discoveries were found during an effort to locate a possible ninth planet, whose presence has been inferred indirectly. The study is set to be published by The Astronomical Journal.

Co-authors Scott Sheppard and Chad Trujillo have submitted the details of their discoveries to the Minor Planet Center, which catalogues such objects, along with asteroids and comets.

Their search was carried out using several observatories around the world, including the the four-metre Blanco telescope in Chile and the eight-metre Subaru telescope in Hawaii.

One of the new objects, known for now as 2014 FE72, is the first distant Oort Cloud object found with an orbit entirely beyond Neptune.

Its orbit takes it some 3,000 times further than the Earth is from the Sun.

The Oort Cloud is the large shell of objects that occupies the outermost region of the Solar System.

Dr Sheppard, from the Carnegie Institution for Science in Washington and Dr Trujillo, from Northern Arizona University, have been analysing how the new planet-like bodies fit into larger theories about a ninth planet lurking in the Solar System's furthest reaches.

The evidence for this planet has largely been deduced by peculiarities of distant Solar System objects.

One of the new celestial bodies, 2013 FT28, shares characteristics of its orbit in common with the bodies whose positions and movements lent support to the planet nine idea - but it also shows some differences.

Based on analysis of other small bodies in the outer Solar System, astronomers have proposed that - if it exists - the ninth planet is several times more massive than Earth and is at least 200 times further than the distance between the Sun and Earth.

The new work should help constrain the location of this proposed ninth planet.

Pluto, discovered in 1930, was previously known as the ninth planet. But its planetary status was removed in 2006, following the discovery of an object of comparable size in the Kuiper Belt, a ring of icy bodies just beyond Neptune.