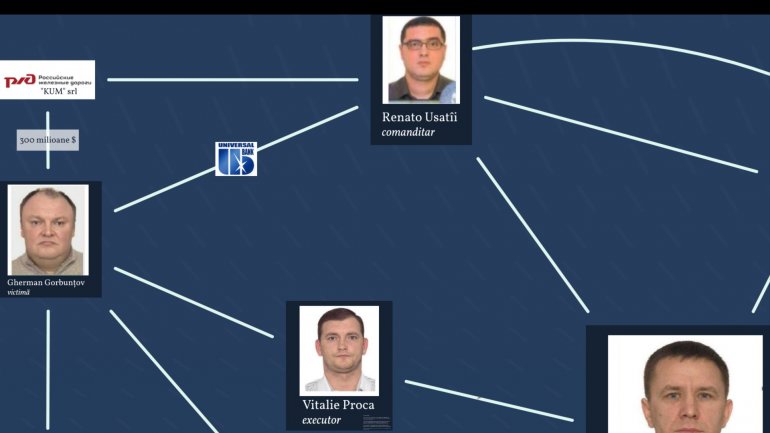 New details came to light in the assassination attempt of Russian entrepreneur Gherman Gorbunţov. Prosecutors have announced, during a press conference that the crime's mastermind, Ion Druţă, also known as "Vanea Pisateli" was questioned, as well as other measure taken to investigate the matter, in order to establish the persons who ordered the assassination.

As a result, Pisateli has indicated and re-confirmed the fact that fugitive Renato Usatîi was the one to order Gorbunțov's murder, for 500 thousand euro. Inspectors will continue to collaborate with Grate Britain's authorities.

According to Office of the Prosecutor General of the Republic of Moldova, Usatîi led a criminal group between 2011- 2012 and meant to kidnap Gherman Gorbunţov, take everything he owns and finally, murder him.

"For those criminal actions, Renato Usatîi promised the executors 10% of Gherman Gorbunțov's goods and money. For them, the numbers of over 300 million, Gherman Gorbunțov owed, was very tempting" Prosecutor Vitalie Busuioc declared.

The place and methods were establish by Oleg Timoşenko and Ghenadie Vechiu. Vitalie Proca was meant to fatally shot the man with a given weapon. Proca was hired by a criminal authority known as Vanea Pisateli.

"Vitalie Proca was supposed to receive the weapon, study Gherman Gorbunțov's route and already knowing his address, following Ion Druță's command, he threw away the cell phone used to communicate and on March 20 2012 has made an murder attempt upon Gherman Gorbunțov" Prosecutor Vitalie Busuioc stated.

After committing the crime, Proca immediately returned to Moldova. Later, he killed a man in Romania, where he was also condemned for murder, after being detained in Moscow and extradited to Bucharest.

Prosecutors from Moldova tried to questioned the man, but haven't managed to do so because of Russian authorities, the country that arrested him forbade it, but also Proca himself refused.

"According to the accusations declaration and the eyewitnesses questioned in the case, 200 thousand euro was a head start from a total amount 600 thousand euro, for which Proca had to follow Renato Usatîi's script, according to which Proca Vitalie has to say that Gherman Gorbunțov's murder was ordered by another person than Renato Usatîi" Prosecutor Lilian Bacalîm said.

Event after recovering from his coma, entrepreneur Gherman Gorbunţov declared that the assassination attempt was ordered by Renato Usatîi, who was acting upon the interest of his Russian partners from Moscow: Boris Uşerovici, Valeri Markelov and Serghei Mendeleev.

"Mr. Usatîi has personally condemned me. He attempted to end me for his friends Ușerovici Boris and others. Usatîi has tried to take my life to paint Ușerovici's with blood, while Ușerovici himself condemned me so that I can never recover what he stole from me" Gherman Gorbunţov announced.

The latter was later arrested by Chisinau Police on suspicion of attempting, along with his accomplice Usatîi, to attain false confessions regarding Gorbunţov's murder attempt.

On internet appeared an interception, proving that Malarciuc knew of it.

"He suggested me such a variant. He gave me a stick, a dictation machine yes and said: Go to Vitalie and make him talk, let me hear at least a phrase that could interest me. -What about remuneration? -He gave 100 thousand", accused Valeriu Malarciuc said.

Mass media has started publishing multiple cell phone interceptions proving that Proca and his relatives were receiving money from Usatîi, in exchange the killer had to become a scapegoat, a fact later on confirmed by Vania Pisateli for Zeppelin journalists.

"- Who gave you Gorbunțov's address in United Kingdom? -Renato, through Ghena. -When did this happen? -In autumn 2001, before New Year, or something along those lines, maybe after New Years, something like that" accused Ion Druţă said.

According to zeppelin.md journalists, Usatîi had attempted multiples times to frame others for the assassination attempt.

In 2013, he blamed Gorbunţov's former partner, Alexandr Antonov, namely, in place of killer Vitalie Proca, another one, named "Oleg" took the blame. That person has made a short movie given to journalists from RISE through Vania Pisateli, framing Antonov as the one who ordered the murder.