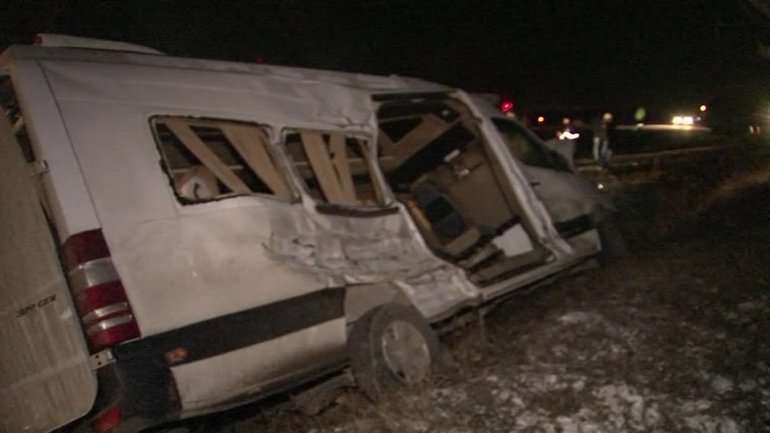 Two persons died and other ten injured after a minibus collided with a truck. The tragedy took place yesterday evening near the village Mandrestii Noi, Sangerei district.

The minibus on route Glodeni - Chsinau was heading to Chisinau. Near the village Mandrestii Noi, the minibus driver tried to overrun and hit a truck carrying trash. Following the impact, the minibus got into the ditch.

The driver is alive, is not yet established who are the deceased but subsequently will be determined. About 12 people were in the bus. The minibus was heading from Glodeni to Chisinau. After the collision with the vehicle, it skidded off the road and got in the culvert.

Truck involved in the accident belongs to sanitation company in Balti. The driver claims that the bus came out without ensuring.

At the place of accident came two SMURD crews which transported the 10 injured persons to the hospital in Balti.

Doctors say that people are out of danger.

Of the 10 people, nine were hospitalized. Among them is a minor of 17 years, who is in the Pediatric Department of Clinical Hospital in Balti. Also five people are in intensive care, their condition is serious but stable.

In this tragic accident died two persons, a 55-years-old man and a woman, whose identity has not yet been determined.

Police started a penal investigation in this case. According to preliminary data, the truck driver could be guilty of producing the accident, by not ensuring when he came from an adjacent road. He was detained for 72 hours.

If found guilty the man faces up to 10 years in prison.