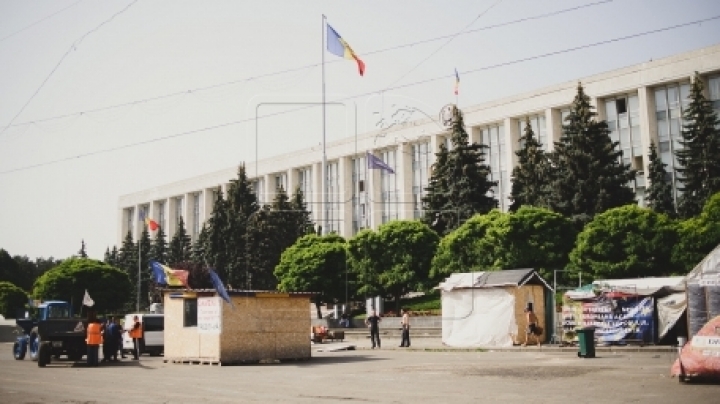 A Chişinău court today is to consider the request of the City Hall demanding the DA Party of the Ţopa convicts to take away the installations on the city’s central square. People from the Capital also insist that the protesters should dismantle their tents.

The Moldovans returning home from abroad are revolted at the mess the Dignity and Truth Party’s representatives make in the capital’s downtown.

Some say but few people stay in the tents: “It’s very ugly. I have not been in Moldova for ten years and it’s a disaster."

The capital’s folks cannot tolerate the tents in the Great National Assembly Square. They say they have lost their trust in the DA Party’s representatives:

"It’s revolting! If I were the authorities, I would come at night and demolish them. They repair the road and these tents stray senseless. For how long are these tents going to be here?! They have stayed here since September. It’s almost one year. They must compulsorily be dismantled the soonest possible."

"They must be taken off. The people have lost their trust in such people, and they have no dignity.”

The City Hall demands the protesters to uninstall their tents in order to repair the road. On the Independence Day (27 August) the authorities plan to organize a series of events related to the 25th anniversary of the Moldovan State.