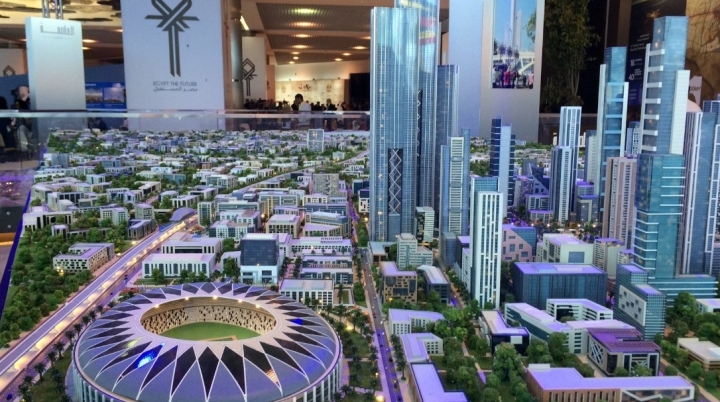 Egypt's new capital city moved a step closer to reality with the announcement that Chinese developers will largely fund the megaproject, reports CNN.

The China Fortune Land Development Company (CFLD) agreed to provide $20 billion for the currently unnamed city, after a meeting between heads of the firm and Egyptian President Abdel Fattah El Sisi.

This follows a previous commitment of $15 billion from another Chinese state-owned company, bringing the project close to its $45 billion budget requirements for phase 1.

Plans for the new capital were first announced in March 2015. Government officials described the development as a solution to crowding, pollution and rising house prices in Cairo.

The 700 square kilometer city to be constructed in the desert to the East of Cairo would become the new seat of government, and it is presented as a far grander vision than the current capital.

Proposals for the city include housing for five million people, over 1,000 mosques, smart villages, industrial zones, a 5,000-seat conference center, and the world's largest park.

Interest in the project has been brisk. An Indian company is reportedly planning a vast medical center and university, while a Saudi firm intends to build a 12.6 hectare mosque and Islamic museum.

Construction is already under way. According to Egypt's Al-Ahram newspaper, engineers have begun work on infrastructure including bridges and 210 kilometers of roads.

The first phase of the project will see government ministries and residential blocks rise from the sand. This phase could be complete within five years, with the first residents moving in.

Despite the optimism from officials, there are concerns that the project will encounter familiar problems. Egypt has already constructed several satellite towns around Cairo, which have registered low occupancy despite high investment.

"The needs of Cairo should be met by the existing eight new towns around it," says David Sims, an urban planner and author based in the Cairo. "But people call them ghost towns."

The satellites repeated the same mistakes, says Sims, which are also likely to affect the new capital.

"The new towns produced housing that is unaffordable, unobtainable and inaccessible for the majority of Cairo's inhabitants," says Sims. "The new towns were built with a high modernist approach that did not allow the informal enterprises and activities that most Egyptians rely on."

Egypt has a fundamentally misguided approach to development planning, according to architect and planner and Kareem Ibrahim of the NGO Tadamun.

"We have a chronic problem with the urban government of existing cities, and no matter how many cities you build you are not solving this problem," he says.

Ibrahim's research found that around 50% of Cairo neighborhoods lacked access to sewage services, while public services were failing, and municipal councils were operating with as little as $4 per capita per year.