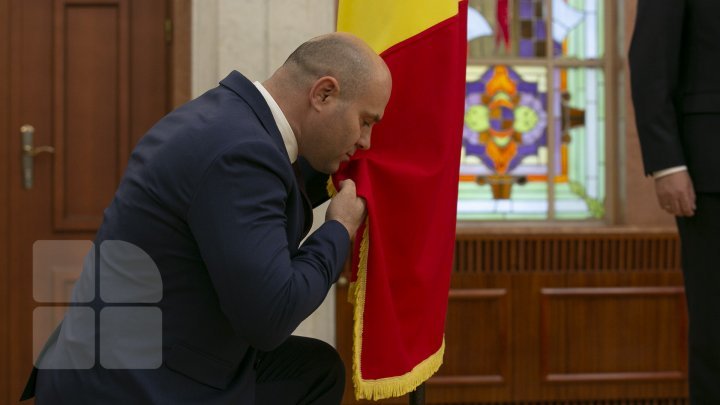 The new members of the cabinet of ministers took oath today. Attending the event were Parliament Speaker Zinaida Greceanii and President Igor Dodon.

The head of state congratulated all ministers, noting that he hopes that the new government would no longer make ”improvisations,” but will work for people’s benefit.

“You are a government sworn in with most votes, and unfortunately, you do not have a political majority behind you. You have been voted not based on political affinities, but you come to solve people’s problems. It would be good for you to spend less time in office and more in the territory and learn from the mistakes committed in the last five months. The justice reform is priority and it must be made not only at the television. Once the winter ends, the process of roads’ constructions should be started,” Dodon said.

„We need a balanced foreign policy. Moldova makes no difference between the foreign partners. You have no time for accommodation; we need immediate progress and if the things are not made correctly, I will ask for changes at the government,” Dodon said.

Prime Minister Ion Chicu said, before the Moldovan leadership, that the new governmental team had committed to improve the situation in Moldova.

“The main actions concerned in the programme of this government comply with the recommendations of Moldova’s president. Now, for the first time ever, the executive, legislative and presidential branches have common goals and we will work to fulfill our mission,” Chicu stressed, quoted by Moldpres.

Pavel Voicu will act as Interior Minister and Fadei Nagacevschi will hold the position of Justice Minister. Diplomat Aureliu Ciocoi will lead the Foreign Affairs Ministry and the Defence Ministry will be led by Victor Gaiciuc.

Corneliu Popovici will act as Education, Culture and Research Minister. Viorica Dumbraveanu will hold the office of Health, Labour and Social Protection Minister and Ion Perju will act as new Agriculture, Regional Development and Environment Minister.

Attending the swearing-in ceremony was also the bashkan (governor) of Gagauzia, Irina Vlah.