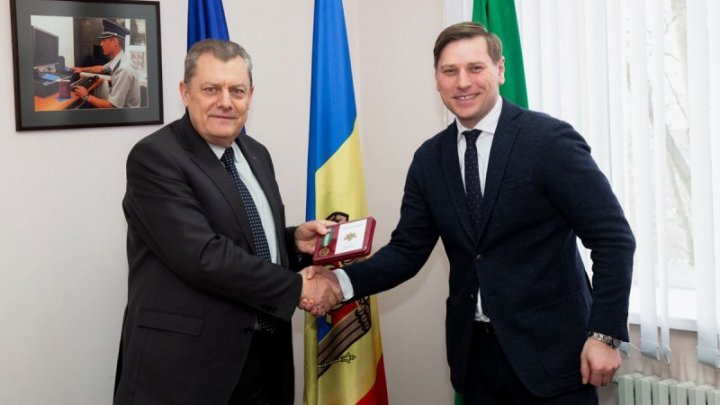 Head of the Border Police General Inspectorate, Fredolin Lecari, had a meeting with Simion Terzioglo, International Program Coordinator of the Mission of the International Organization for Migration in the Republic of Moldova.

During the discussions, the joint initiatives that are currently underway and will be implemented have been reviewed.

Fredolin Lecari personally thanked Simion Terzioglo in the context of fruitful cooperation, giving him the "For Cooperation" Medal.

In turn, Terzioglo has sincerely expressed his gratitude for the distinction and noted that the Border Police can continue to count on its experience and support, as well as the IOM Mission to Moldova, with a view to institutional development through new external assistance initiatives.

Terzioglo has significantly contributed to the promotion and implementation of a range of external assistance projects and other specific actions aimed at supporting the process of reforming the Border Police and strengthening its institutional capacities.

Among the co-operative projects are

-Strengthening migration management and co-operation in the field of readmission in Eastern Europe,

-Improving integrated border management through joint border control and exchange of information along the border between Moldova and Ukraine,

-Implementation of the video control system at the border crossing points and the support for the common sustainable border surveillance of the blue border.