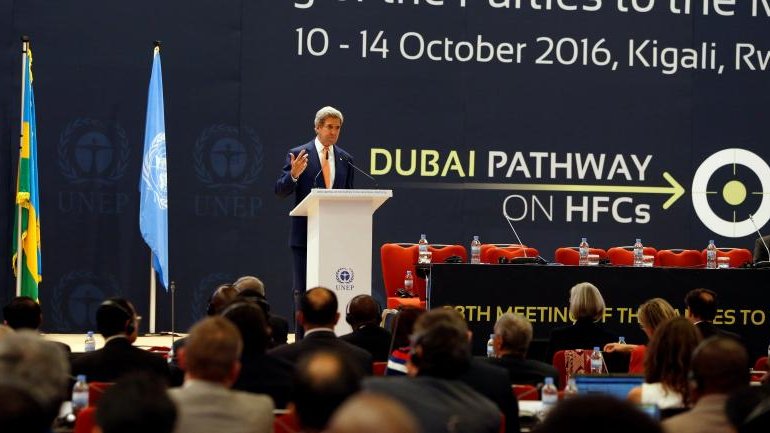 Nearly 200 nations have agreed a legally binding deal to cut back on greenhouse gases used in refrigerators and air conditioners, a major step against climate change that prompted loud cheers when it was announced on Saturday, reports Reuters.

The deal, which includes the world's two biggest economies, the United States and China, divides countries into three groups with different deadlines to reduce the use of factory-made hydrofluorocarbon (HFC) gases, which can be 10,000 times more powerful than carbon dioxide as greenhouse gases.

"It’s a monumental step forward," U.S. Secretary of State John Kerry said as he left the talks in the Rwandan capital of Kigali late on Friday.

Under the pact, developed nations, including much of Europe and the United States, commit to reducing their use of the gases incrementally, starting with a 10 percent cut by 2019 and reaching 85 percent by 2036.

Many wealthier nations have already begun to reduce their use of HFCs.

Two groups of developing countries will freeze their use of the gases by either 2024 or 2028, and then gradually reduce their use. India, Iran, Iraq, Pakistan and the Gulf countries will meet the later deadline.

They refused the earlier date because they have fast-expanding middle classes who want air conditioning in their hot climates, and because India feared damaging its growing industries.

The deal binding 197 nations crowns a wave of measures to help fight climate change this month. Last week, the 2015 Paris Agreement to curb climate-warming emissions passed its required threshold to enter into force after India, Canada and the European Parliament ratified it.

But unlike the Paris agreement, the Kigali deal is legally binding, has very specific timetables and has an agreement by rich countries to help poor countries adapt their technology.

A quick reduction of HFCs could be a major contribution to slowing climate change, avoiding perhaps 0.5 degrees Celsius of a projected rise in average temperatures by 2100, scientists say.

Environmental groups had called for an ambitious agreement on cutting HFCs to limit the damage from the roughly 1.6 billion new air conditioning units expected to come on stream by 2050, reflecting increased demand from an expanding middle class in Asia, Latin America and Africa.

Donors had already put $80 million in a fund to start implementing the agreement, said Gina McCarthy, administrator of the U.S. Environmental Protection Agency.

But Sergey Vasiliev, the head of the Russian delegation, said Russia's estimates of the costs were higher and argued countries' contributions to a multilateral fund to help poor countries adapt their technology should be voluntary.

The details of the funding will be finalized at a later meeting.