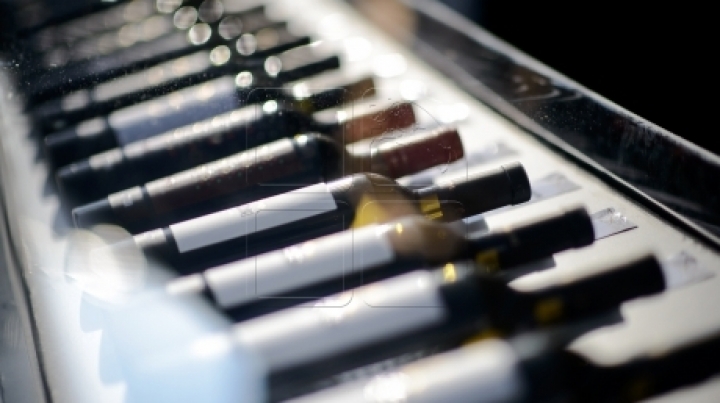 100,000 visitors are expected at the National Wine Day, including 30,000 foreign tourists come to Moldova particular on this occasion.

National holiday began with a suite of songs from Advahov Brothers Orchestra. A parade followed the four regions in wine-making companies, which was attended by representatives of more than 40 wineries, including large companies, small manufacturers and producers of cognac, meeting under the single brand "Moldovan wine. A Living Legend".

Each winery was accompanied by a pair of dancers. Once in the center of the Great National Assembly Square, they were all caught in a Moldovan dance.

"Wine is the beverage of gods. A product that makes us proud to be citizens of the Republic of Moldova, which is our main card overseas. I want to thank you on behalf of the Government that you have developed an industry up to the standards the highest quality, which is recognized worldwide. I once again assure you of all openness and support the government that appreciates your contribution to the development of the Moldovan economy" , said Prime Minister of Moldova, Pavel Filip.

Traditionally, every year, during the official ceremony of opening of the National Wine Day the best specialists in the wine sector are awarded for excellence and outstanding performance achieved.

"The US government supports the development of the wine sector for over 10 years. We have always believed in the potential exception and the bright future of Wine Moldova. Personally, I found the Moldovan wines a few years ago and I was very impressed by their quality, but more importantly - their personality. Because of wines, Moldova became better known in the world" , said US Ambassador to Moldova, James D. Pettit.

The "Grand Prize for outstanding achievements in wine" trophy was awarded this year to "Castle Mimi" entreprise being handed over by the Prime Minister of Moldova, Pavel Filip, in the presence of officials, representatives of diplomatic corps and professionals in the field.

"We are extremely happy because we worked several years to restore the first and only winery castle in Moldova. We work a lot for the "Castel Mimi" wines to represent Moldova over the world" ,  commented the company's director of "Castel Mimi" Cristina Frolov.

However, the "Most skillful oenologist" prize was handed to Luisa Chichir for "Purcari" winery.

"Thank you for this high distinction. Unless you're really passionate about what you do, you can get performance in the field," said chief oenologist at the winery "Purcari" Luis Cichir.

For the third consecutive year, the event is held under the single brand of country "Moldovan wine. A living legend" and aims to discover legends of Moldovan wine and wine millenary traditions of our people.

National Wine Day has become over time the main celebration that highlights our traditions, recognized at home and abroad.

National Wine Day enjoys great success, being visited by hundreds of thousands of visitors from home and abroad and dozens of journalists and bloggers event reflects the national and international media.