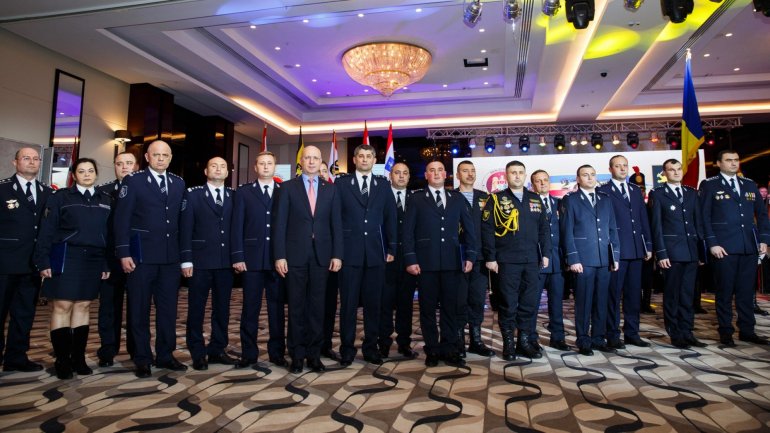 Police officers from Moldova have celebrated yesterday the 27th anniversary since the establishment of the National Police. With this occasion, the administration of the Ministry of Internal Affairs has held a reception, which Prime Minister Pavel Filip also attended.

The administration of the Ministry mentioned that throughout the years, Law enforcement from Moldova have managed to make the society think better of this profession.

"27 years means that Republic of Moldova enjoyed stability, which was ensured by law enforcement. National Police was always the pillars of sovereignty, peace and security in our country" Minister of Internal Affairs, Alexandru Jizdan said.

"25 years ago I have chosen to be a police officer and since then, I have taken upon myself to offer my time, care and professionalism to citizens" chief of General Police Inspectorate, Alexandru Pânzari said.

Prime Minister Pavel Filip has expressed his gratitude for all those who are guarding the law.

"Police officers are those who maintain peace and security in our society. I know myself the salary officers receive. I know the conditions, sometimes harsh, in which you have to work. At the same time, I wish to assure you that the Government is doing everything it can to create better conditions for you" Pavel Filip said.

Best law enforcement officers have received diplomas from the Government, as well as the title of Officer of the Year. Those awarded claim that they have chosen this job to make people feel safe.

"I want order in our country. It was the wish that I came here today with, the wish I expressed at the commission to be admitted as law enforcement and I wish to be part of this change" patrol officer Alexandru Cioban declared.

"It is one of those fields where a woman can make a statement, to prove that policewomen can do beautiful things, to prove that we are not weaker than men. We can also uncover crimes and defend our country" investigator, Alina Stahurschi stated.

Republic of Moldova has over 9 000 police officers.