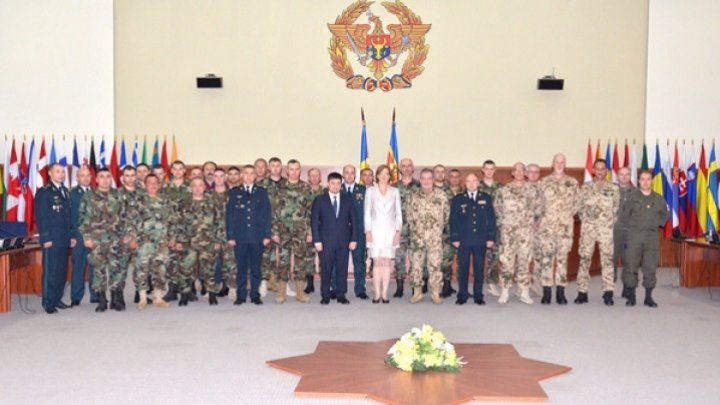 The National Army has prepared for the first time 18 drivers who are qualified to carry dangerous goods, including ammunition, in compliance with national and international standards.

They were trained by a group of experts from the Logistics Command of the German Ministry of Defense during a specialized course held in Chisinau.

The 18 soldiers received their graduation certificates and driving licenses at the Ministry of Defense in the presence of the State Secretary for Defense Policy and International Cooperation, Dumitru Mînzărari, German Ambassador to Moldova, Iulia Monar, and the German instructors.

Dumitru Mînzărari congratulated the graduates on the occasion of obtaining an international driving license for the transportation of dangerous goods and thanked the German partners for the training of the Moldovan soldiers during the course.

At the same time, the Secretary of State noted that this project contributes to the development of the National Army's capabilities in line with international standards, as well as to ensuring the security of the civilian population.

Ambassador Monar also mentioned that the project aims to strengthen the security of the population and the capabilities of the Armed Forces of the Republic of Moldova, and Germany will continue to support the implementation of the programs initiated by our country in this field.

"The course, which is a premiere for both the Republic of Moldova and the German side, lasted three weeks, during which the drivers studied the procedures and rules for the packing and loading of the goods at risk, the vehicle marking techniques and the actions which should be done in the event of an accident, "said Head of the Logistics Department of the General Staff, Colonel Iurie Brumă.

The source specified that the 18 National Army soldiers had passed a capacity examination, after which they were given the right and qualification to transport dangerous goods not only on the territory of the country but also in all the other 50 member states of the European Agreement on the International Carriage of Dangerous Goods (ADR).

Training is part of a project funded by the Federal Republic of Germany. The project also provides a donation of 5 new trucks with a trailer, worth 1.5 million Euros. Vehicles are due to arrive in the Republic of Moldova by the end of the year.