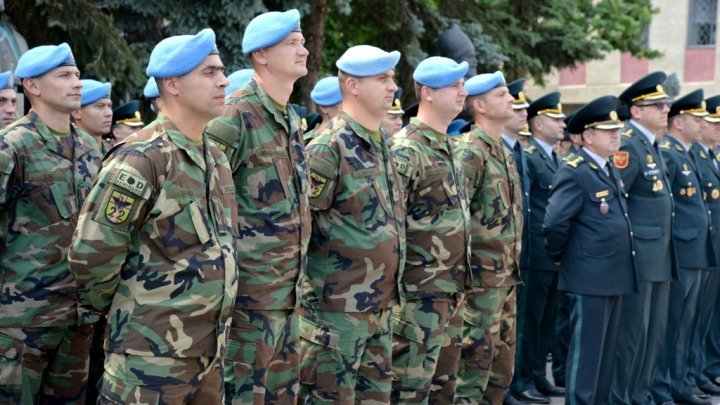 foto: military press
The deployment ceremony of the National Army contingent in Kosovo's KFOR peacekeeping operation was held today at the Defense Ministry. The event was attended by ambassadors, attached to the defense, as well as relatives of military peacekeepers.

Italy's Chief of Staff, General Claudio Graziano, for the first time in our country, said Italy welcomed the Republic of Moldova's contribution to peace-building in the Balkans in the Multinational Forces Union,  KFOR, led by the Italian army.

"The difficult but successful activity of the KFOR operation will strengthen the international image and position of the Republic of Moldova, offering the opportunity to participate in other new missions," said General Graziano.

For his part, Defense Minister Eugen Sturza thanked Italian and American partners for training, detachment and logistics of Moldovan troops in the operations.

The Defense Minister expressed his confidence that the 41 peacekeepers will fulfill their mission with honesty, honor and devotion, as they did on national territory and in foreign operations - in UN-mandated missions, the EU, the OSCE and NATO.

"I trust that you will be able to become good ambassadors of our country in Kosovo and you will be proud of your performance," Eugen Sturza said.

The 9th National Army contingent, which will head to Kosovo on Saturday, June 9, is made up of 41 professional militants, including a senior state officer, seven gendarmes, and a 33 militants platoon to execute security missions for military and patrol purposes.

Moldovan soldiers will be deployed in Camp Vilaggio Italia, a multinational base in Pech, Kosovo. Their mandate in Kosovo will last for six months.
loading...
AFLĂ imediat Știrile Publika.MD. Intră pe Telegram