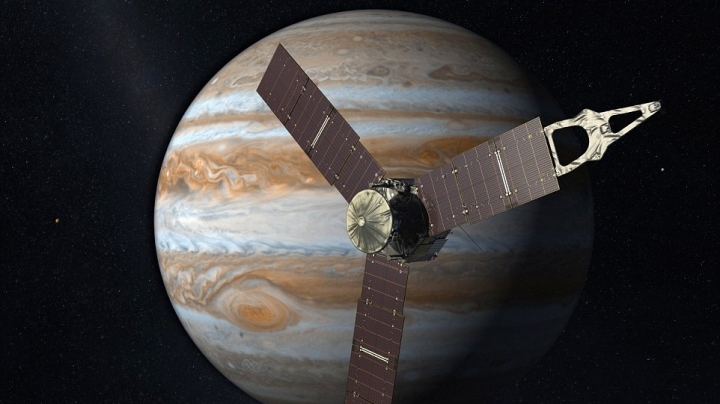 The solar-powered spacecraft which left Earth five years ago has made history by entering into Jupiter's orbit, reports Daily Mail.

With Juno on autopilot, the delicately choreographed move came without any help from ground controllers, so the spacecraft's mission control erupted with cheering and applause when the orbit was confirmed at 4:53 am BST (11.53pm ET).

At a briefing this morning, Bolton, the mission's principal investigator, said: 'We're there. We're in orbit. We conquered Jupiter.'

He added: 'What Juno's about is looking beneath that surface...we've got to go down and look at what's inside, see how it's built, how deep these features go, learn about its real secrets.'

Juno will peer through the swirling clouds in the planet's upper atmosphere and map the interior from a unique vantage point above the poles.

During its mission of exploration, the probe will circle the Jovian world 37 times, soaring low over the planet's cloud tops. Scientists will for the first time be able to see what lies beneath Jupiter's atmosphere, and help unlock secrets about how the solar system formed.

Among the lingering questions are how much water exists? Is there a solid core? And why are Jupiter's southern and northern lights the brightest in the solar system?

There is also the mystery of its Great Red Spot. Recent observations by the Hubble Space Telescope revealed the centuries-old monster storm in Jupiter's atmosphere is shrinking.

The spacecraft will end its mission in 2018 when it takes a swan dive into Jupiter's atmosphere and disintegrates — a necessary sacrifice to prevent any chance of accidentally crashing into the planet's potentially habitable moons.

Speaking to MailOnline ahead of this morning's braking manoeuvre, Dr Jared Espley, program scientist for Juno at Nasa, said: 'It's a very unusual time in the life of a scientists or engineer when these big events happen, because you genuinely feel a connection to a big event, a bigger part.

'It's something that as a space agency we're super excited to do, but as a government we're happy to have this opportunity to do the science.

'You feel that you're representing your country but that you're also representing humanity, this is the spacecraft that we have sent to another planet and it's just remarkable that we as a species have the capability and the desire to understand what's going on with other planets outside of our own.'

Juno is currently travelling through a hostile radiation environment, 'but it should be able to withstand it,' said Kenny Starnes, programme manager for Lockheed Martin, which built the spacecraft.

The probe's camera and other instruments were switched off for the arrival so there won't be any pictures at the moment the spacecraft reaches its destination. Scientists have promised close-up views of Jupiter when Juno skims the cloud tops during the 20-month, $1.1 billion (£828m) mission, with a public vote on areas to focus on.

The fifth planet from the sun and the heftiest in the solar system, Jupiter is known as a gas giant — a ball of mainly hydrogen and helium — unlike rocky Earth and Mars. But scientists still don't know exactly what lies at its centre, or whether it formed within its current orbit, or migrated from elsewhere in the solar system.

With its billowy clouds and colourful stripes, Jupiter is an extreme world that likely formed first, shortly after the sun. Unlocking its history may hold clues to understanding how Earth and the rest of the solar system developed.

Named after the Roman god Jupiter's cloud-piercing wife, Juno is only the second mission designed to spend time at Jupiter.

Galileo, which launched in 1989, circled Jupiter for 14 years, beaming back splendid views of the planet and its numerous moons. It uncovered signs of an ocean beneath the icy surface of Europa, considered a top target in the search for life outside Earth.

The trek to Jupiter, spanning nearly five years and 1.8 billion miles (2.8 billion kilometres), took Juno on a tour of the inner solar system followed by a swing past Earth that catapulted it beyond the asteroid belt between Mars and Jupiter.

Along the way, Juno became the first spacecraft to cruise this far out powered by the sun, beating Europe's comet-chasing Rosetta spacecraft. A trio of massive solar wings sticks out from Juno like blades from a windmill, generating 500 watts of power to run its nine instruments.

Plans called for Juno to swoop within 3,100 miles (5,000 kilometres) of Jupiter's clouds — closer than previous missions — to map the planet's gravity and magnetic fields.

Juno is an armoured spacecraft — its computer and electronics are locked in a titanium vault to shield them from harmful radiation. Even so, Juno is expected to get blasted with radiation equal to more than 100 million dental X-rays during the mission.

Last week, stunning new images and the highest-resolution maps of Jupiter at thermal infrared wavelengths showed a glowing view of Juno's target, a week ahead of the Nasa mission's arrival at the giant planet.

The maps reveal the present-day temperatures, composition and cloud coverage within Jupiter's dynamic atmosphere, and show how giant storms, vortices and wave patterns shape the appearance of the giant planet.

The observations were taken between February and June 2016 to characterise Jupiter's atmosphere ahead of Juno's arrival.

'We used a technique called 'lucky imaging', whereby individual sharp frames are extracted from short movies of Jupiter to 'freeze' the turbulent motions of our own atmosphere, to create a stunning new image of Jupiter's cloud layers,' said Dr Leigh Fletcher of the University of Leicester.

'At this wavelength, Jupiter's clouds appear in silhouette against the deep internal glows of the planet.

'Images of this quality will provide the global context for Juno's close-up views of the planet at the same wavelength.'

The team made observations at many different wavelengths, optimised for different features and cloud layers in Jupiter's atmosphere, to create the first global spectral maps of Jupiter taken from Earth.

'These maps will help set the scene for what Juno will witness in the coming months.

'We have seen new weather phenomena that have been active on Jupiter throughout 2016.