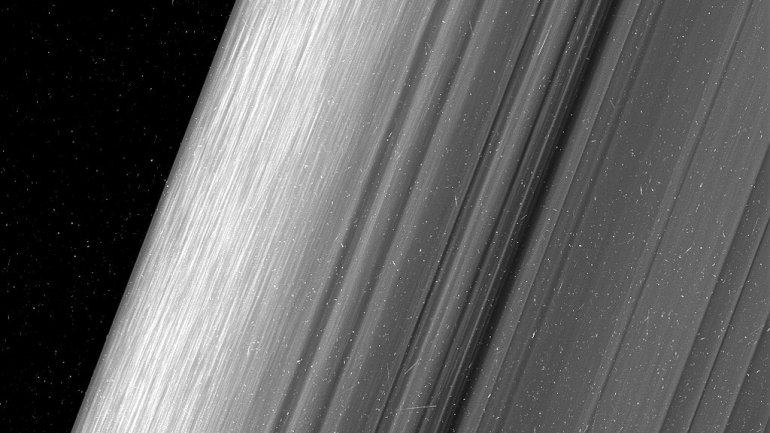 Nasa has released spectacular images of Saturn’s rings, revealing that the rings may be home to millions of orbiting “moonlets”.

The images from the Cassini spacecraft resolve details on a scale of 550 metres – around the size of the tallest buildings on Earth. They include previously unseen features within the rings, including giant double-armed “propeller” structures that suggest a constellation of miniature moons are hidden within the planetary rings, informs The Guardian.

The rings comprise ice, dust and rocks, ranging in size from tiny specks to house-sized chunks. The so-called “propellers” are gaps in the material stretching thousands of miles across that scientists believe are created by moonlets.

The moonlets, sized somewhere between a house and 1km in diameter, clear the space immediately around them, but are not large enough to sweep clear their entire orbit around Saturn, as seen with the “shepherd” moons Pan and Daphnis.

The images also show grainy structure within individual rings, which astronomers refer to as “straw”, indicating where material has temporarily clumped together for reasons that astronomers are still trying to understand.

Carolyn Porco, the Cassini imaging lead based at the Space Science Institute in Boulder, Colorado, said: “As the person who planned those initial orbit-insertion ring images, which remained our most detailed views of the rings for the past 13 years, I am taken aback by how vastly improved are the details in this new collection.”

Cassini, which has been studying Saturn’s rings from orbit for nearly 13 years, is now about halfway through its penultimate mission phase of 20 orbits that dive past the outer edge of the main ring system. These “ring-grazing” orbits will continue until late April and then Cassini will begin its grand finale, in which the craft will repeatedly plunge through the gap between the rings and Saturn. The first plunge is scheduled for 26 April.