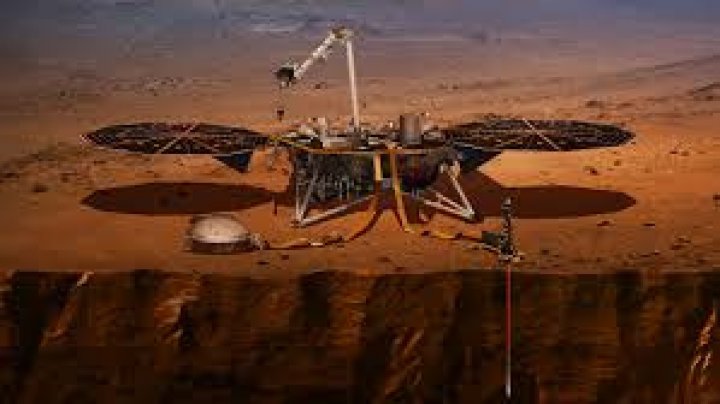 Mars is about to get its first thorough checkup since it formed billions of years ago, as NASA's InSight heads to the red planet after launching Saturday morning from Vandenberg Air Force Base in California, writes CNN.

"Three ... two ... ... zero ... Lift off, of the Atlas V -- launching the first interplanetary mission from the West Coast and NASA's Insight, the first outer space robotic explorer to study the interior of Mars," a NASA announcer declared amid the rumble of takeoff at 7:05 a.m. ET, via NASA TV.
The Atlas V 401 rocket also carried two suitcase-size spacecraft, designed to orbit Mars, as it blasted into the dark and cloudy sky, which turned bright gold for seconds as the rocket ascended in a plume of smoke. NASA's previous interplanetary missions launched from Kennedy Space Center in Florida.
After a six-month journey, if it all goes as planned, InSight -- whose name is short for Interior Exploration using Seismic Investigations, Geodesy and Heat Transport -- will touch down just north of the Martian equator on November 26, joining five other NASA spacecraft operating on and above Mars.
The 790-pound (358-kilogram) probe will then begin its two-year science mission to seek the "fingerprints" of the processes that formed the rocky planets of the solar system. It will measure the planet's "vital signs: 'its "pulse' (seismology), 'temperature' (heat flow) and 'reflexes' (precision tracking)," according to NASA.
The explorer doesn't have wheels, so it can't roll around gathering up dirt to study. But it does have a 7.8-foot-long (2.4-meter) robotic arm. The arm will place a seismometer on the ground to detect "marsquakes" (think earthquakes, but on Mars, of course).
InSight also will burrow 10 to 16 feet into the crust of Mars, going 15 times deeper than any previous Martian mission, according to NASA.
The mission's principal investigator, Bruce Banerdt, told CNN he thinks InSight will fill the last gaping hole in NASA's exploration of Mars, some 75 million miles (121 kilometers) from Earth.
AFLĂ imediat Știrile Publika.MD. Intră pe Telegram