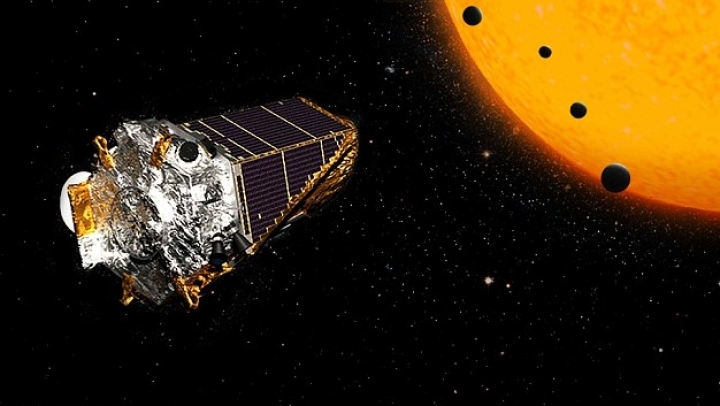 An international team of astronomers have discovered a treasure trove of new worlds, reports Daily Mail.

So far they have reported finding 197 planet candidates, with 104 planets confirmed by scientists.

The planets, which are all between 20 and 50 per cent larger than Earth by diameter, are orbiting the M dwarf star K2-72, found 181 light years away.

The scientists, led by the University of Arizona, say that the possibility of life on the new planets around such a star cannot be ruled out.

Four of the planets discovered have been found to be rocky, and could host alien life.

They are thought to be between 20 and 50 per cent more massive than Earth, and they orbit a star smaller than our sun.

Two of the worlds could have radiation levels that are similar to Earth.

The huge finding of planets was found by combining data with follow-up observations by earth-based telescopes including the North Gemini telescope and the WM Keck Observatory in Hawaii.

Both Kepler and its K2 mission discover new planets by measuring the subtle dip in a star's brightness caused by a planet passing in front of its star.

In its initial mission, Kepler surveyed just one patch of sky in the northern hemisphere, measuring the frequency of planets whose size and temperature might be similar to Earth orbiting stars similar to our sun.

In the spacecraft's extended mission in 2013, it lost its ability to precisely stare at its original target area, but a fix created a second life for the telescope.

After the fix, Kepler started its K2 mission, which has provided an ecliptic field of view with greater opportunities for Earth-based observatories in both the northern and southern hemispheres.

Because it covers more of the sky, the K2 mission is capable of observing a larger fraction of cooler, smaller, red-dwarf type stars.

Such stars are much more common in the Milky Way than sun-like stars, which means that nearby stars will predominantly be red dwarfs.

Professor Ian Crossfield, a researcher at the University of Arizona's Lunar and Planetary Laboratory, who led the study, said: 'An analogy would be to say that Kepler performed a demographic study, while the K2 mission focuses on the bright and nearby stars with different types of planets.

'The K2 mission allows us to increase the number of small, red stars by a factor of 20, significantly increasing the number of astronomical 'movie stars' that make the best systems for further study.'

Dr Steve Howell, project scientist for Kepler and K2 at NASA's Ames Research Centre in Moffett Field, California, said: 'This bountiful list of validated exoplanets from the K2 mission highlights the fact that the targeted examination of bright stars and nearby stars along the ecliptic is providing many interesting new planets.'