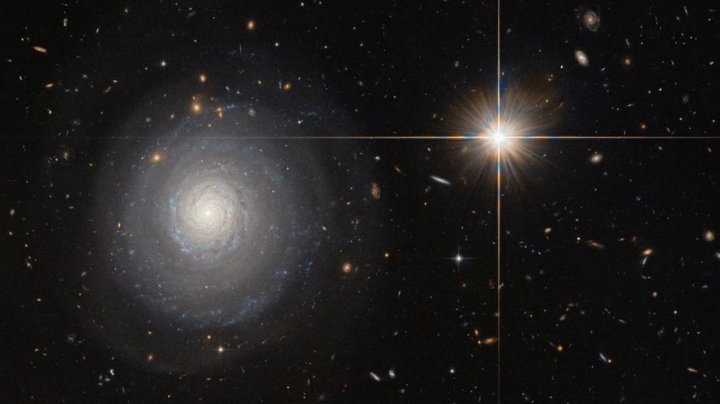 According to rt.com, a galaxy frantically at work producing hundreds of stars every year has been captured through the lens of the Hubble Space Telescope. Known as MCG+07-33-027, the latest discovery has redefined what astronomers know about “starburst” galaxies. The beautiful galaxy lies 300 million light years from Earth in a very lonely, isolated part of space, something that has left astronomers confused.

The phenomenon of starburst galaxies is believed to be triggered by galactic collisions, such as in the case of Antennae Galaxies NGC 4038 and NGC 4039. However, the observation of MCG+07-33-027 throws doubt on that theory.

Astronomers are “still speculating about the cause” of the intensive activity, the European Space Agency said in a statement. But the face-on view that we have of the galaxy gives the scientists plenty of detail to study.

Stars are formed when clouds of dust and gas gather together and form a disc. It eventually becomes a spinning sphere that develops into a star over millions of years. Most galaxies only produce a couple of stars per year, our own Milky Way creates on average one. The intense activity within a starburst galaxy speeds up this process significantly.

The Hubble Space Telescope has been capturing images of the cosmos since it was first launched in 1990. Earlier this month is revealed an image showing the ‘beating heart’ of a nebula.