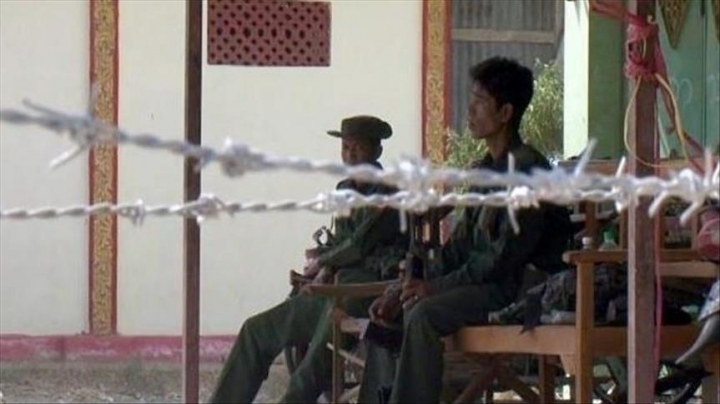 The government has said that at least nine policemen and eight militants were killed during the attacks, and a police officer remains missing.

An overnight curfew (7 p.m. - 6 a.m.) was announced Sunday evening while authorities brought the situation under control.

The areas are still governed by a partial curfew (11 p.m. - 4 a.m.) placed since communal violence between Rakhine Buddhists and Rohingya Muslims broke out in mid-2012.

On Monday, Maungtaw District General Administrator Ye Naing told Anadolu Agency that all border trade gates and all crossings have been closed since Sunday.

“No one is allowed to cross the border as government troops are clearing the areas,” he said by phone.

“Trade could not be restarted this week,” he said, adding that the re-opening of the border gates depends on the situation.

Ye Naing said that some 400 government schools have also been temporarily closed.

On Monday, state-run media reported the foreign minister for Rakhine State's regional government as saying that police have launched an investigation into the attacks and are tracking those responsible in cooperation with the military.

Despite police arresting two militants during the attacks, authorities are yet to confirm which group is responsible.

"We are not sure if the attackers are from the RSO, but they shouted the word 'Rohingya' during the raids,” Police Chief Zaw Win told a press conference Sunday, referring to the Rohingya Solidarity Organization (RSO).

The RSO is a shadowy outfit that takes its name from the Muslim minority group, which has been described by the United Nations as one of the world's most persecuted.