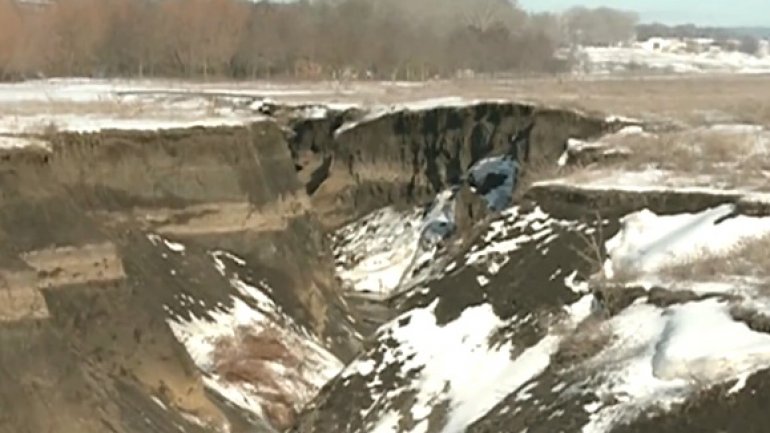 About 30 buildings from the Tarancuta village in Cantemir district are about to be engulfed by water. The river that flows through the town is washing the soil away and the ravine is expanding by the day towards the locals livings.

The city mayor said that a solution to the problem that appeared 15 years ago would be changing the rivers flow. But the local authorities don’t have the necessary funds to do that.

The locals say that it’s at its worst when the snow is melting and during the heavy rain season. The people are scared that their dwellings and hard earned goods might end up drowning in the gully.

“In springtime this place is flooded. You can’t even get here by foot. Were it not for that dam we would’ve moved to the higher ground a long time ago”

“It’s very risky. The ground here is soft, especially in the spring and when it’s raining hard. The situation is severe.”

The river bed reached a locals property a few years ago. To stop the soil from being washed away he dug a well and planted a bunch of trees all on his own.

“About two meters of soil have been washed away from here. All of these trees have been planted by me. Cracks appeared in the buildings because of the soil subsiding” , says Vasile Corja a resident of Tarancuta.

Local authorities have planted over 200 acacia trees to strengthen the river bank but the trees were destroyed by animals. New trees will be planted from the Ecologic Fund claims Constantin Axenti, mayor of the Chioeslia commune.

He also stated he will insist on getting the funds necessary to change the course of the river. The population of the Tarancuta village in Cantemir district is 600 people.