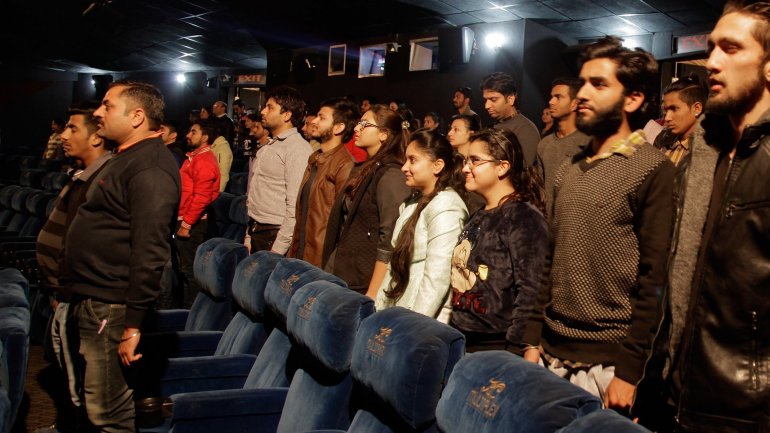 Twelve people have been arrested at an international film festival in south India for refusing to comply with a supreme court order to stand for the national anthem at cinemas, reports The Guardian.

Protests were held on Tuesday at venues involved in the International Film Festival of Kerala over the arrests, the second police incident in recent days involving the new national anthem requirements.

The group were detained after festival organizers complained to police that some moviegoers had refused to stand for the anthem before a film screening on Monday, an investigator with the Kerala police, Anil Kumar, told the Guardian.

They were released on bail but Kerala police have started an investigation into whether they breached the Prevention of Insults to National Honor Act of 1971. Intentionally breaching the act is punishable by a fine and up to three years in prison.

India’s supreme court announced last month that cinemas across the country had to start film screenings by playing the anthem, during which time doors should be locked and moviegoers should stand.

The court said the order was needed so that citizens would “feel that they live in a nation”, and that too much disrespect of national symbols had been indulged in the name of “individually perceived notions of freedom”.

The decision played into concerns held by some Indians that the country’s traditionally pluralist character was being undermined by a coarser nationalism that leaves less room for minority rights or dissent.

The anthem, Jana Gana Mana, was first ordered to be played in Indian cinemas in the early 1960s after India’s war with China, but enforcement was lacklustre, and the practice was eventually phased out in all but two states.