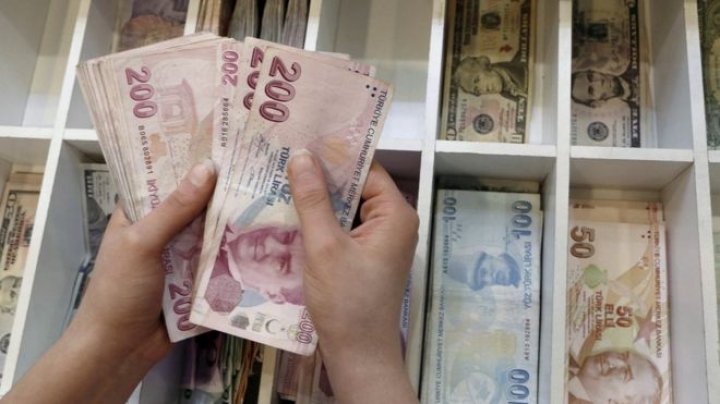 Moves to ease Turkey's economic woes have failed to stop market turmoil as the country's row with the US deepens, writes bbc.com.

Turkey's President, Recep Tayyip Erdogan, said on Monday that the US was seeking to "stab it in the back".

The US last week imposed sanctions on Turkey over its refusal to extradict a US preacher imprisoned in the country.

The sanctions caused market turmoil, which the central bank attempted - but failed - to soothe with a series of market-boosting measures.

"We are together in Nato and then you seek to stab your strategic partner in the back."

As the crisis deepened at the end of last week, the lira and the Turkish stock market slid sharply. Mr Erdogan, who has presided over soaring inflation and borrowing levels, says the lira's fall is the result of a plot rather than prevailing economic conditions.

Turkey's interior ministry said it was taking legal action against 346 social media accounts it claimed had posted comments about the weakening lira "in a provocative way".

The lira's worst day was Friday, when US President Donald Trump approved the doubling of tariffs on Turkish steel and aluminium, following Turkey's refusal to free an American pastor who has been in detention there for nearly two years.

Experts have blamed the drop in the Turkish lira on fears that the country is descending into an economic crisis.

Turkey's stock market has also fallen 17%, while government borrowing costs have risen to 18% a year. Meanwhile, inflation has hit 15%.

Investors are worried that Turkish companies that borrowed heavily to profit from a construction boom may struggle to repay loans in dollars and euros, since the weakened lira means there is now more to pay back.

Although the lira rose slightly after the central bank's move to support the economy, it still hit a new record low against the dollar.

Before the central bank's announcement, the lira was down 9% before recovering slightly to stand 6% lower in late morning trading in Turkey.

Investors globally are worried about the damage spreading and have been prompted to sell riskier assets, including Asian stocks and emerging market currencies.

Analysts said investors were now looking for safe havens in the form of the yen, as well as the US dollar.

What are Turkish officials doing about the lira?

The Turkish Central Bank announced on Monday that banks would be given all the liquidity - help to keep money moving - they needed.

But the bank did not increase interest rates, which would help contain inflation while supporting the lira.

It is not clear if this comes after Mr Erdogan's pressure. The president is famously averse to interest rate rises.

He has dismissed the fall of the currency as "a storm in a tea cup" and urged Turks to sell dollars and buy lira to help boost the currency.

Why are Turkey and the US at odds?

Mr Brunson has been detained for nearly two years, accused of links to the outlawed Kurdistan Workers' Party and the Gulenist movement, which Turkey blames for a failed coup in 2016.

The Turkish president is angry that the US has not taken more action against the Gulenist movement and what he said was a failure "to unequivocally condemn" the 2016 coup attempt. The US has refused to extradite Fethullah Gulen, who lives in Pennsylvania.

US support for Kurdish rebel groups fighting Islamic State (IS) fighters in northern Syria is another major difficulty, given Turkey's battle against a Kurdish insurgency in its own country.

Mr Erdogan has also been getting closer to Russia. That creates an awkward triangle, given that Turkey is a Nato member, Russia is Nato's number one threat and the organisation is obliged to defend any member that is attacked.

Nato uses the Incirlik Air Base in Turkey to fight against IS and there has been some domestic pressure on Mr Erdogan to close it.

Why is there so much fear this will spread?

Investors are worried that Turkish companies could struggle to repay loans in dollars and euros - a debt pile that only grows as the lira falls.

More than a third of Turkish banks' lending is in foreign currencies, according to Reuters.

Worries that the falls in value would spread were recently underlined by a report in the Financial Times saying that the European Central Bank is concerned about the exposure of eurozone banks to Turkey.

In particular, the report points out that Spain's BBVA, Italy's UniCredit and France's BNP Paribas, all of which have significant operations in Turkey, are especially exposed.

President Erdogan sees Turkey's problems as the result of a plot rather than economic fundamentals. That kind of talk might play well politically with some audiences in Turkey, but it won't wash in the markets.

Turkey has underlying problems in the form of a fairly large international trade deficit, high levels of foreign currency debt owed by the private sector and a persistent inflation problem.

Certainly the situation has been aggravated by the deterioration in political relations with the United States and the higher tariffs that Turkey now faces on its steel and aluminium sales in the US. But the scale of the apparent impact was due to the fact that Turkey was already economically and financially vulnerable.

What do people in Turkey think about this?

Business executive Kemal, who lives in Istanbul, said: "It is not unusual or unexpected to see some companies go under when there is such a sudden devaluation of the currency. However, I do not believe it will crumble the economy."

British holidaymaker Paul Fothergill, who is staying in Dalyan, says he has been holidaying in Turkey for the last 30 years. He said: "Since we arrived on Thursday the Turkish lira has nosedived. It's very sad for locals and investors, but incredibly good for us, the Brits.

"You can imaging how cheap our evening meals and trips have been. The most expensive meal, including drinks and tip, so far was £12 for me and my wife."

Heather, a Briton who has lived in Turkey for 15 years with her family, said: "This last year has seen ridiculous price rises and price differences in shops and supermarkets. Prices of basics like butter, cheese, fruit and vegetables are so expensive that we think twice about putting them in our baskets.

"Petrol and utilities have also seen price rises. Wages have not gone up, so we worry about where this will end. It may be beneficial for those with pounds, dollars or euros but rest of us are struggling."