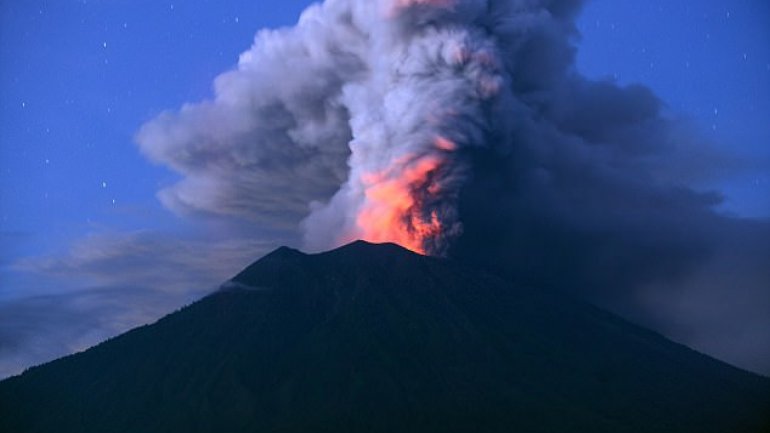 As many as 120,000 tourists have been stranded in Bali by the ongoing eruption of Mount Agung, with some put on flights leaving after Christmas, wrote dailymail.co.uk

The holiday island's airport remains shut for at least another 24 hours due to clouds of ash billowing from the volcano.

Today's extension of the airport closure means more than 900 flights have now been cancelled, leaving tens of thousands of travelers unable to leave Bali.

Qantas passengers are among those stranded, and some reported being told their flights had been rescheduled to December 27, The Australian reported.

'I thought Qantas would be a bit more organised but we can't find them here, they haven't sent one email out,' said Pagan Raston, who was due to fly on on Monday.

'Quite a few people have had their flights rescheduled to December 27.'

A Qantas spokesperson told Daily Mail Australia no flights have been rescheduled, but passengers may have been put on other flights, which could be weeks away.

When the Denpasar airport reopens Qantas will put on extra flights, allowing those passengers to leave much earlier, the spokesperson said.

'Any customers on cancelled Bali flights have been proactively moved to our next available scheduled services for now, where there is limited availability over the peak travel period,' they said in a statement.

'As has been the case in previous disruptions of this nature, when it is safe to resume flying, we plan to get our customers moving quickly by operating additional services where possible.'

Passengers on other airlines complained they had been given no information at all, leaving them frustrated.

'My kids are really upset. They've been crying on the phone because they've seen reports on the TV news and are worried about us,' said David Plowman of Perth.

One group of Australians was even considering travelling to Surabaya by bus and ferry in order to get home.

With tourists lined up at the airport Bali authorities issued a warning to residents to leave the 10km evacuation zone around the volcano.

Up to 100,000 locals were told to move into evacuation shelters as a cloud of volcanic ash reached three kilometers into the air.

Indonesian volcanologist Gede Suantika said lava was building up inside Mount Agung and would spill over when it reached the edge.

That would result in a slow flow of red hot lava, but the volcano's steepness could lead to a more powerful eruption.

The pyroclastic flow from the 1963 eruption killed 1600, and authorities in Bali are preparing for the worst.

Cold lava flows, known as lahar, have already flooded the rivers and canals of nearby villages, but many locals ignoring warnings to leave the area.