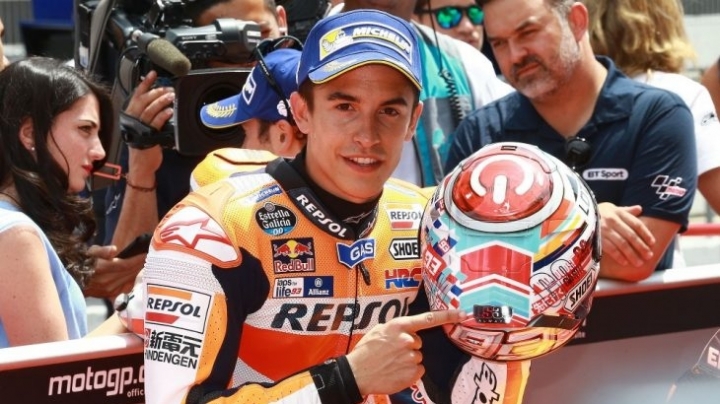 On a somber day, following the passing of Moto2 rider Luis Salom on Friday, Repsol Honda’s Marc Marquez was the quickest to adapt to a new track configuration on Saturday and clock a time of 1:43.589, nearly a half-second faster than Yamaha’s Jorge Lorenzo, to win the pole for Sunday’s Catalunya MotoGP race. Marquez’ Honda teammate Dani Pedrosa will start third, earning his first front-row start of the season, says Cycle News.

After consultation with the riders, officials decided to run a revised circuit, used in Formula One, which introduces a chicane before the high-speed final right hand turn, where the tragedy of the Salom crash occurred yesterday. This layout was tested two years ago in an official MotoGP test, but the configuration wasn’t elected for use in Motorcycle Grand Prix racing. As riders had to deal with a new section of track, practice time was extended with a new schedule for Saturday.

In Q2 It was on his first flying lap that Marquez established a new best time on the revised circuit with his 1:43.905. After the first half of the session the provisional front row was Marquez, Lorenzo and Pedrosa. Marquez would only better that time in the final run of the session with his 1:43.589. The young Spaniard was the only rider to dip into the 1:43 time bracket.

With 30 seconds remaining Hector Barbera put his Aventia Ducati into P2, but he was displaced in the closing seconds of the session, after strong final laps for Lorenzo and Pedrosa.