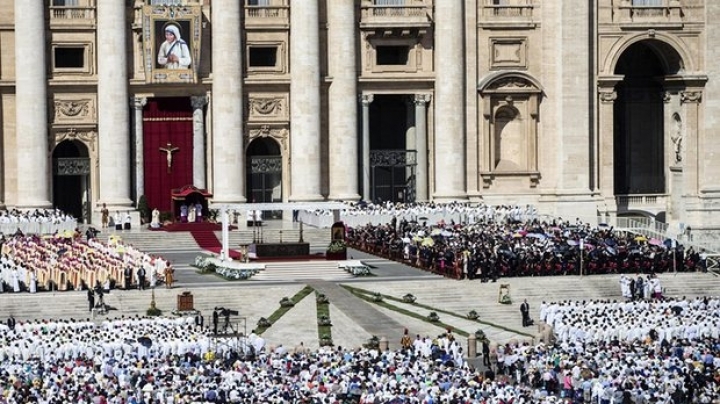 Hundreds of thousands of people have gathered in St Peter’s Square in the Vatican to witness the canonisation of Mother Teresa, the Catholic icon revered around the world for her work with the poor and dying, reports The Guardian.

The canonisation mass, led by Pope Francis, took place under a huge portrait of the Albanian nun, who established the Missionaries of Charity order in Kolkata in 1950. The order now runs 758 homes, hospices and shelters in 139 countries around the world.

Nuns – some wearing the distinctive blue and white robes of Mother Teresa’s order – priests, pilgrims and tourists crammed into the square in front of St Peter’s Basilica for the two-hour ceremony.

Police officers and volunteers in yellow tabards and baseball caps marshalled the crowds between crash barriers, and Red Cross workers handed out bottles of water. Dignitaries in attendance included a 100-strong delegation sent by the Indian government.

During the canonisation ceremony, Cardinal Angelo Amato read a brief description of Mother Teresa’s work before asking the pope to canonise her.

In his homily, Francis described Mother Teresa as an “emblematic figure of womanhood” and a “tireless worker for mercy”. He told the crowd: “May she be your model of holiness.”

In an unscripted comment, he added that many people would have difficulty in referring to her as Saint Teresa. “I think we’ll carry on calling her Mother Teresa.”

Mother Teresa, who was born Anjezë Gonxhe Bojaxhiu in 1910 in what is now Macedonia, was proclaimed a saint almost 19 years to the day after her death in 1997. Conforming with the process of canonisation, two miracles were deemed to have been performed after she died, both involving the alleged cure of terminally ill people.

Mother Teresa was awarded the Nobel peace prize in 1979. She said she did not deserve the award but accepted it “in the name of the hungry, the naked, the homeless; of the crippled, of the blind, of the lepers, of all those people who feel unwanted, unloved, uncared for throughout society.”