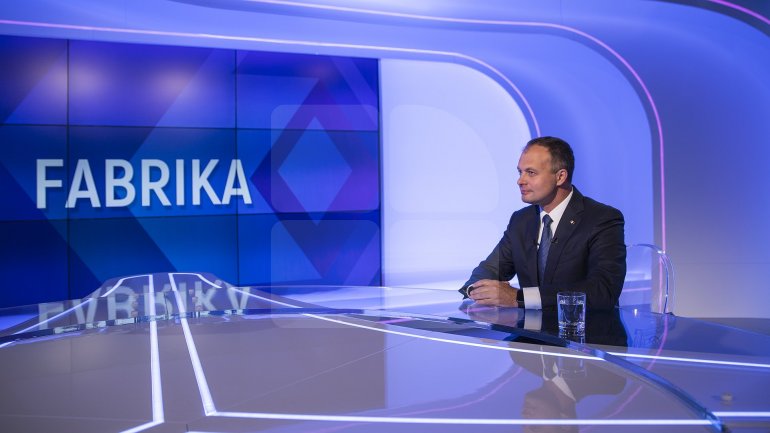 President of the Moldovan Parliament, Andrian Candu has been special guest at Fabrika, starring Cristian Tabără.
The main topics discussed were the recent declarations made by the official, regarding the recent violent acts of the opposition, the parliament meeting that will take place the following day, as well as the lack of collaboration between the Government and the President.

"Of course in an ideal situation there would be a harmonious collaboration between the President and the Parliament. There will always be split opinions and ideas, but never has it reached to a point of complete cut off, which is a pity, as it could cease all new reforms. Therefore we need to address to the Constitutional Court of the Republic of Moldova, as it became the only way to solve such issues."

"The Constitutional Court has already clearly expressed the law. When a minister is appointed by the Prime Minister, the President has no right to deny, regardless of his own opinion.  Igor Dodon is breaking the law, due to his stubbornness. There are certain way things have to be done,  a minister has to be appointed through a document, only afterward will he take a pledge. Never before has there been such a void between the President and the Parliament. It became the reason why the Government interfered and requested the assistance of the Constitutional Court. "

"There are certain things Igor Dodon is not allowed to decide, just like there are certain things the Parliament and the Government has no power over. A President must abide the law and not do everything he pleases. Let us take Romania for example, despite the fact that the President there has more power than here, when the Parliament purposed Victor Ponta as minister, despite his obvious preference of Iohanis, he accepted. Here the laws are a bit different, regardless Igor Dodon has to abide them. We currently await for the Constitutional Court  to tell us our next move."

"Once the majority of the Government has agreed and even funded money to implement a new law, it has to be done. If we were to talk about the meal ticket bill, then Igor Dodon should know that such law exists in many foreign countries."

"Dear Maia Sandu, I am Andrian Candu and I have published first Kroll report and plan to publish a second one. I address to Maia Sandu and her Party: You claimed that second Kroll report No. 2, has to be made by the end of October and offered to the public. With all due respect, there is no Kroll  2 yet. Once it will be made, we will decide how to publish it."

"We came to a stage where the National Bank of Moldova cannot stand on its own two feet. Kroll came up with a strategy of suing Switzerland, Cyprus and Balkans. The bank can not deal with Great Britain, as it lacks the means. Nor can it act alone, because now it became a matter of politics and finances."

"Our roads have split. It confuses me, as seizing power, means attaining it illegally. I was chosen by the law and made President of the Moldovan Parliament based on my colleagues choice. In Moldova we have the law of freedom of speech. So I will have to disappoint Igor Dodon by saying that he is not the only one allowed to talk. I apologize beforehand, but I believe he should also buy a good Romanian dictionary."

"Vlad Plahotniuc and Igor Dodon are two politicians, on one side we have  far-left party, on another a far-right one. When it comes to an understanding between them, I cannot interfere, as they are both responsible for their own actions. In foreign countries, the opposition is given more power and I wish to identify the opposition and offer the same to it. Only then will our country be able to move forward. In the Parliament we have a stable opposition and we hear their thoughts and take in their ideas, it always creates an alternative."

"The damage done to the Parliament was not only seen, but also felt, especially from a financial point of view. The protesters who forced their way into the Parliament on 20th January have destroyed and stolen items, bought from the tax payers money, from the money that came from all of us."

"In the end the citizens are the best judges. The aim of the current Government is to ensure peace and prosperity, to finish the started reforms. Changes have to be done, regardless of the domains. It all require certain act from the Government, as they cannot work properly when there is a revolution happening daily. Maybe someone wishes for them to happen, but we do not. Those who judge our work, first wait and analyse our actions, then make a decision."