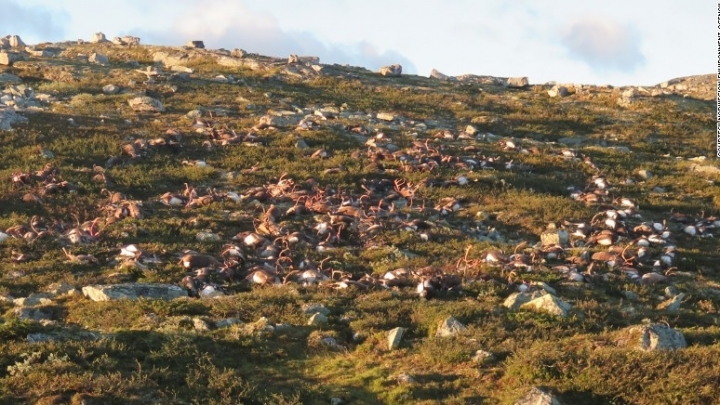 More than 300 reindeer have been killed by a single lightning strike at a Norwegian national park.

Pictures released by the Norwegian Environment Agency on Sunday show 323 carcasses scattered across a small, isolated area in Hardangervidda National Park. The plateau-like park in south-central Norway is home to Europe's largest herds of wild reindeer, according to its website, CNN reports.

One of the agency's inspectors discovered the dead animals over the weekend after a storm passed through.
Wild animals are occasionally struck by lightning, but the agency has never seen so many killed at once, spokesperson Kjartan Knutsen told CNN.

"We have never experienced such numbers before. This is very large," Knutsen said. He said the wild reindeer were huddled together because of heavy weather on Friday, when the strike occurred.

"That's why it's possible for the lightning to kill so many," he said.

Humans rarely visit the remote area. The dead reindeer were found by one of the agency's inspectors because Norway is in the midst of its annual wild reindeer hunting season.

It's not the first time a large herd of animals have been killed by lightning. In 2005, 68 cows were killed in Australia by a single bolt.