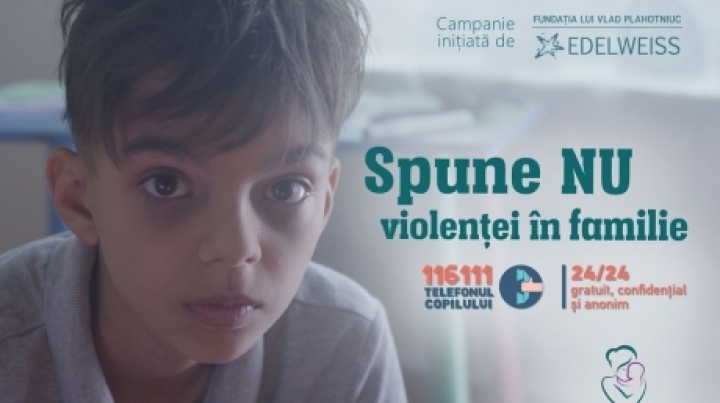 More and more cases of domestic violence are reported daily at Child Line.

According to the Ministry of Labour, Social Protection and Family, since the launch of the information "Family protection" campaign, the number of phone calls to the unique national phone 116 111, intended specifically for reporting cases of violence against children, has increased from 15 calls per day to 25 calls per day. As a result, authorities are working to solve the cases of abuse involving children.

Phone calls to 116111 number are free, taken by operators to manage such situations.

From August 16th, the Child Line is nationally promoted through an unprecedented mobilization initiated by Vlad Plahotniuc's "Edelweiss" foundation - by launching an information campaign about the methods victims of domestic violence can use to seek help and support.

Under the "Family protection" motto, the foundation has already launched an emotional TV spot, which became quickly popular, achieving a record number of views of over 200,000.

More than 100 billboards were located in teh country so that more and more people in different parts of the country, can learn about the methods by which children who need help can talk to specialists.

Simultaneously, the online community has created the hastag #SayNOtodomesticviolence, where those who wish to support this cause can post their photos wearing purple ribbon - the international symbol of the fight against violence.