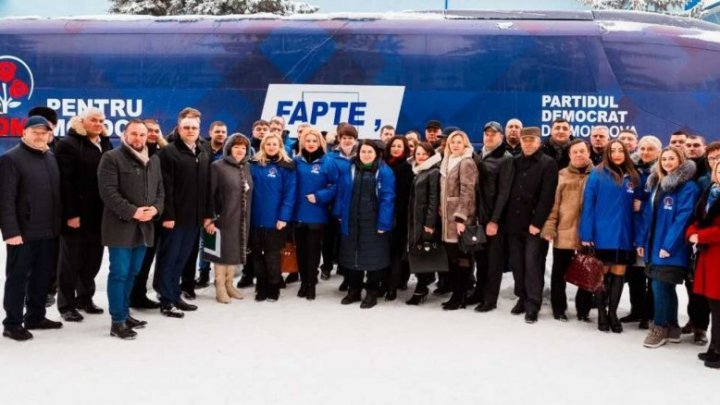 Parliament will endorse the plans to raise social allowances and allocation of new payments at the first reading this week.

PDM vice-president Andrian Candu mentioned this within the delegation who reached Floreşti.

Democrats began their visit to the local police inspectorate.

"It was a challenge for us but it's worthy to bring the country's finances and public finances in order. Our goal was to find money for raising salaries," said Andrian Candu, vice president of the PDM.

The PDM candidate in the eighth district, Eugene Nichiforciuc, spoke to the police about the increase in salaries.

"The previous governments from 1991 to 2016 managed to raise your salaries a bit, 10-15 percent annually. Today we face other non-wage-related questions "said Eugene Nichiforciuc.

Nichiforciuc was asked what he would do if he won the elections and proposed ministry.

"Our answer is the following - all those who are in the constituency - the next four years remain in the Parliament."

Then the delegation arrived at Floreşti District Hospital. Democrats chose to walk on foot to see the quality of work under the "Good Roads for Moldova" program.

The Democrats discussed reforms with employees of the hospital.

Also, the Democrats visited the social canteen, opened near the Church of Saint Hierarch Mitrofan. It was built with the financial support of Eugene Nichiforciuc. Currently there are over 200 people in Floreşti to benefit free lunch.