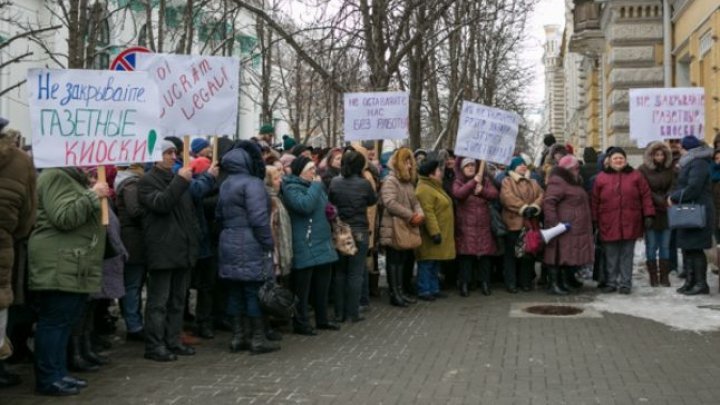 Employees of Moldpresa State Enterprise held a rally in front of Capital City Hall. Being unhappy that they could lose their jobs, they requested municipal authorities not to evacuate the booths where they have been working.

This happens after the mayors announced earlier that they will shut down all the kiosks in the center of Chisinau.

Over 50 sellers have protested for half an hour.

"We are protesting against shutting our boots, people have to read the press, do not mess up when people stop at the station and get a newspaper, coffee."

"We have made a lot of effort to open the kiosks and invest in them every year. We sell press and bring interesting things to people. Many friends of us say they feel discomfort when they can't buy newspapers", said Dumitru Climov, manager of the Moldpresa kiosks.

A representative of the vendors was invited to a discussion with the Interim Secretary of the Municipal Council. Within three days at the local elected representatives' meeting, a new draft on the conduct of the street trade will be debated. It stipulates that all the booths on the central streets of the capital, as well as public parks and gardens, should be evacuated in order not to affect the image of the city.

The mayor's representative told protesters that the document could be modified, and the kiosks selling the press continue to work.

"The respective complaint was sent to the Interim General Mayor, Ruslan Codreanu, so in three days, we will convene a meeting with the sector heads, with the representatives of the Architecture Department and the Trade Center Headquarters, and we will make a specific decision on the street press booths", said Adrian Talmaci, interim secretary of Chisinau Municipal Council.

People expect the municipality to come up with solutions to their problem:

"They said that in 2-3 days they will make a decision for our problem, if they can not find a solution, we come back here again."

Around 500 vendors are working at Moldpresa kiosks.