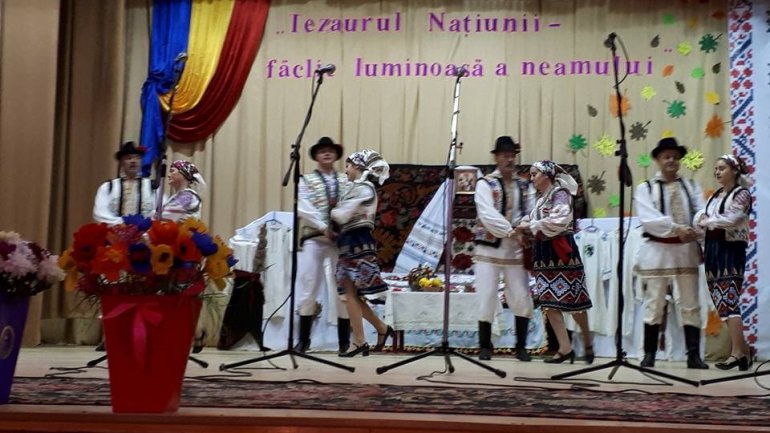 Moldova's traditions were today showcased in a concert organized for elders in Făleşti. The show, organized by PDM's Organization for Old People, was meant to make elders particpate in cultural activities.

On the stage of Făleşti Cultural House have evolved several artistic groups from the district. Each presented the specifics of the traditions from their native villages:

"I came from Călugăr to present a wedding tradition, the unfolding of the bride."

Guests could also enjoy an exposition of old and rare items. Elena Rusu, from Risipeni, owns a museum in her village. She now owns over 2 000 traditional artifacts.

"We have a handcrafted carpet, from 1939, even the year itself is sown into it" Elena Rusu said.

Dozens of craftsmen have exposed their works. Among them counts spouses Moroziuc from Răuţel village. The man has carved wood his whole life, while his wife braided with vegetable fibers.

"Most of those items can be used, but we also have some for decoration, such as those dishes with traditional ornaments" Dumitru Moroziuc said.

"This is a basket that can be taken to the market, where bough items can be places" Veronica Moroziuc explained.

Guests claim to have had fun:

"This is well organized and the collectives have presented themselves excellent."

"Each brought a piece of their community. I feel very happy."

"There are items we can buy, keep close to our souls and pass on to our children."

The artists and craftsmen received money awards and diplomas.

"Today Făleşti saw an extraordinary event, where wise people took part in. PDM supported them and wishes to give them a small prize" PDM deputy Valentina Buliga announced.

The event took place within the "National Treasure - The lit touches of our people" project, which took place in 16 regions from the country.

"Our aim is to make elders more active. This project was meant for old people to get up on stage, to remind us of our traditions and songs" president of the National Organization of the Elderly, Nina Ţurcanu declared.

"We tried to make everyone take part in it, from all the districts, but selected only 10 folklore collectives in the end" Făleşti President Iraida Bînzari said.

By the end of the year, such events will take place in five more regions from the country.