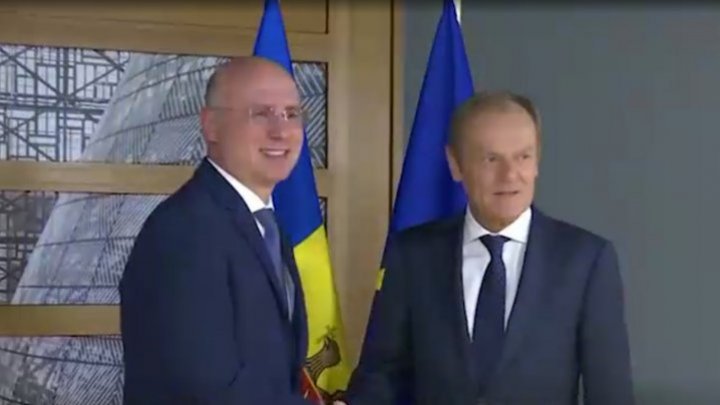 The European Union counts on the fact that the Parliament will continue to implement the Association Agreement and will keep the relations with the EU. This topic was discussed by the prime-minister Pavel Filip and the president of the European Council, Donald Tusk. The officials had a bilateral meeting at Brussels, at the 10th anniversary of Eastern Partnership.

They talked about an European agenda in Chisinau and also about the political evolution after the parliamentary elections. After the meeting, the prime-minister declared that Tusk appreciates the reforms implemented by the Moldovan government. He suggested that the following coalition must keep the same way.

"Moldova is expected to implement the reforms. I am glad to hear positive things and to see the progress in the economical and political areas. At the same time, we recognize that we have a lot to do. For sure we count on the European Union's support. We're determined to continue these reforms", declared prime-minister Pavel Filip.

The president of the European Council met other prime-ministers and presidents from the Eastern Partnership. Tusk has organized also a festive dinner, where he discussed about the partnership's evolution among the first decade and about it's future.

In this context, prime-minister Pavel Filip declared that he would like to offer a clear perspective for the European Integration.

The Eastern Partnership is a cooperation between the EU member countries and six states from the Eastern neighborhood: Armenia, Azerbaijan, Belarus, Ukraine, Georgia and our country.