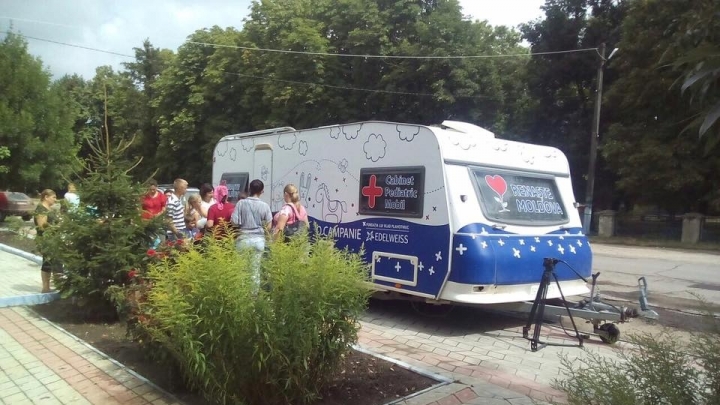 The pediatric mobile cabinet has reached yesterday the Glodeni district. Almost 100 children were examined for free by a team of physicians. Through the infections found in children are the cardiovascular ones, respiratory infections and dental caries. The campaign “Moldova’s Rebirth” is a part of action program of Vlad Plahotniuc’s “Edelweiss” foundation.

The mothers brought their children in Glodeni in order to benefit from free consultations given by doctors from Chisinau. This is because in the villages they live are family doctors, but not medical equipment for finding pathologies. The mobile office is equipped with modern equipment, including an ultrasound.

The mothers were glad that their kids could be examined:

“It is very good, because not all of us have the possibility to go to Chisinau to get examinations. I think it is very good that they came, examined our kids, thank you. –Are you going to a doctor when it hurts somewhere or periodically? – When she is hurt somewhere, when she coughs.”

“We are glad that there is such a prophylaxis for children.”

“They should come more often, at least twice a year. It is impossible to go to Chisinau with children, for example to pass this kind of controls.”

The children often get sick because their parents do not go to doctors periodically, and do not feed the correctly, the doctors say.

They either lack money, or are misinformed how to take care of them.

“The problems are various, starting with dental affections, which are encountered at most children, ORL affections, there are also found cardiac pathologies. We recommend parents to go to Mother and Child Institute for a free consultation to specialist doctors” said the pediatrician Mariana Capcelea.

Since the beginning of the campaign, in April, were examined over 4,000 children from various localities in Moldova. Until fall, the mobile pediatric office “Moldova’s Rebirth” will reach other tens of villages. The action takes part of a campaign of Vlad Plahotniuc’s “Edelweiss” Foundation, organized in partnership with Ministry of Health.