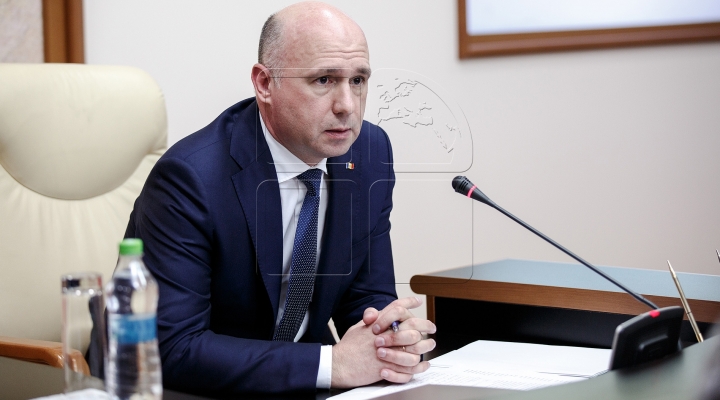 (UPDATE 11:25) Explanations regarding interview for Reuters agency, given by Prime-minister Pavel Filip

Communication and press relations bureau of the Government of Moldova has the power to issue the following explanations regarding the misinterpretations of some parts of Pavel Filip’s interview for Reuters agency: We specify that the reference regarding the collaboration of Moldova with Russian Federation on the investigation of BEM fraud has a constructive character, that emphasizes the need of enhancing the good collaboration of the two countries on this subject.

As other countries, Republic of Moldova wants a dynamic and healthy collaboration with Russian Federation, in fields important for citizens of both countries, an iterative and recent subject of discussion between prime-ministers Pavel Filip and Dmitri Medvedev.

Prime-minister Pavel Filip has as a priority the success of reclaiming the missing money, as a result of the BEM fraud, by the Moldovan authorities, in collaboration with foreign authorities, and this subject is the main one in discussions with other countries that might support Moldova in this matter.

(8:00)Moldovan pime-minister Pavel Filip said on Wednesday that Russia was not offering enough help to his government to track down and recover $1 billion that was siphoned from the banking system, Reuters reports.

The scandal, in which around one eighth of Moldova's gross domestic product disappeared mostly in unsupported loans, caused uproar in the ex-Soviet country - Europe's poorest - and discredited the pro-European leadership that has pivoted it away from Moscow.

Bringing more transparency to the financial sector is a crucial reform needed for Chisinau to secure a memorandum with the International Monetary Fund. That in turn will unlock aid from the European Union on which the 2016 state budget, which has yet to be approved by parliament, relies.

But only 600 million Moldovan lei ($30.5 million) has been clawed back of the missing $1 billion.

"As regards identifying assets, for example, we are working very well with some of the countries. The Baltics for example, where they're really putting the finger on assets or they're showing us exactly what's the network, the chain by which something was passed over," Filip said in an interview.

"Truth is we're not really working well with the Russian Federation as regards this info on their side. As regards any possible financial chains or networks coming via Russia or towards Russia, as regards the money."

Russian lender VEB Capital had a 24.9 percent stake in one of the banks involved in the scandal, Banca de Economii, while one oligarch suspected of involvement in the scandal was believed to have ties to Russia.

Filip, who took over in January amid street protests as the fifth prime minister since 2009, stressed, however, that Moldova and Russia were working on a co-operation agreement between their respective prosecutors, which may improve matters.

Some, including former Prime Minister Ion Sturza, have said the Moldovan banks were a hub for Russian money-laundering.

Filip's government is waiting for recommendations from the Kroll consultancy on how best to recover the assets.

"We are focusing on asset recovery actions. And this is our expectations from the Kroll company to identify all the assets and subsequently to tell us what actions can be legally done," Filip said.

IN THE DRIVING SEAT

Sitting in front of an EU flag, Filip outlined a series of reform measures to restore public confidence in the political system and to show Moldovans that the government is working in their best interests.

The central bank will receive more powers to step in quickly to tackle problems, whereas before, it had to wait for permission from the ministry of justice, Filip said.

A move to slash the number of intrusive inspections -- currently at 69 -- by government institutions into businesses to check on their operations will make the investment climate more favourable, he said.

Another reform will change the mandate of the anti-corruption agency to focus only on high-level cases. The move follows in the footsteps of Romania, which has seen an unprecedented crackdown on graft into some of its richest and most powerful politicians and businessman.

But while the political situation in Moldova has stabilised, opposition to Filip's government has been vocal.

Protests in January trained their fire on the prime minister's close ties with Vladimir Plahotniuc, Moldova's richest man and first deputy leader of the ruling Democratic Party, who is seen by critics as pulling the strings.

"I would use a metaphor. At that moment in January I was well aware of the fact that I was taking the keys of a car that was broken, that it has no fuel," he said, speaking through a translator. "The truth is, I am driving that car, I am in the driver's seat, and I am happy to drive this car to success."