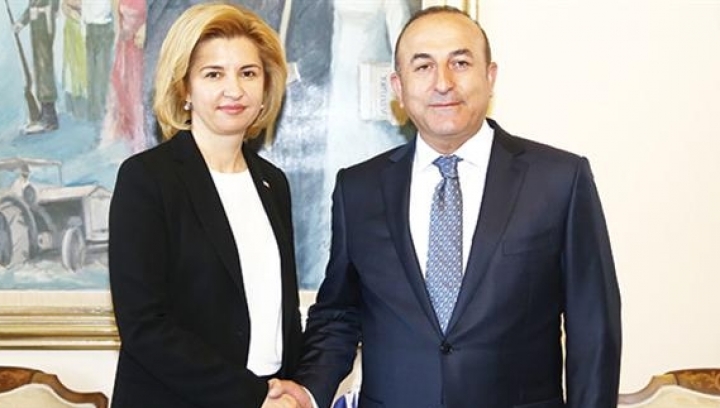 The governor of Moldopva's autonomous region of Gagauzia, Irina Vlah, was in Ankara on June 21 for talks with top leaders, as Turkish side emphasized that the prosperity of Gagauzia was linked to the strength of Moldova.

Vlah first held a meeting with Foreign Minister Mevlüt Çavuşoğlu at parliament and was then hosted by Prime Minister Binali Yıldırım at the Prime Ministry and President Recep Tayyip Erdoğan at his presidential palace later in the day.

“Minister Çavuşoğlu gave a warm welcome to Irina Vlah because of her visit to Turkey as a representative of both Moldova and our cognates. He pointed out that a strong and prosperous Gagauzia can only exist and develop along with a strong Moldova,” Turkish diplomatic sources told the Hürriyet Daily News after the meeting between Çavuşoğlu and Vlah.

“At the meeting, the importance of incremental development in economic and commercial relations was emphasized. Çavuşoğlu underlined that Turkey will continue supporting projects in Moldova and Gagauzia,” the same diplomatic sources said.

Views were also exchanged on the issue of Gagauzia opening a representative agency in Turkey and the issue of mutual educational cooperation between the two countries, they added.

The Gagauz are a predominantly Russian-speaking Turkic Orthodox minority group.

Russia and Turkey’s worsening relations over Syria have caught the Gagauzians in the middle, Vlah said in an interview with Voice of America in February 2016.

“Today it is very hard for us to express an official position on this conflict. Because we continue to keep these relationships,” Vlah told VOA.

Back in March 2015, Moscow hailed Vlah’s victory of in the regional leader’s poll in Moldova’s autonomous territory.

In a statement released at the time, the Russian Foreign Ministry said the election of Irina Vlah indicated that most Gagauzia residents support “further developing their traditionally close ties with the Russian Federation.”

Gagauzia, most of whose 160,000 people are Turkic-speaking Christians, enjoys economic autonomy but has Moldovan police, schools, and courts.

In early 2014, Gagauzia held a referendum in which voters overwhelmingly chose closer ties with Russia and opposition to Moldova-EU integration.