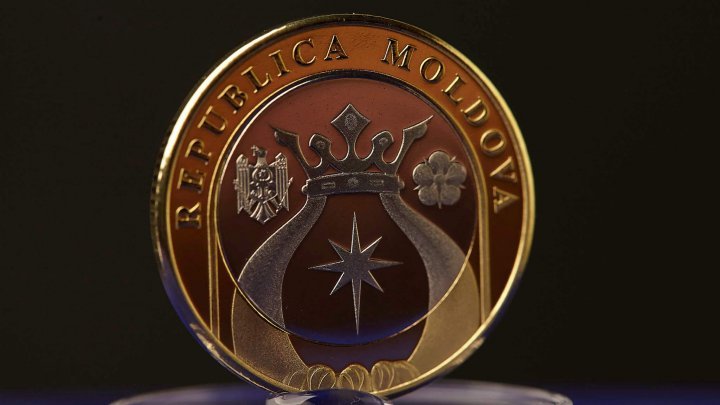 Moldova's Central Bank launches today new metal coins of 1, 2, 5 and 10 lei. They will be used along with the existing banknotes.

The coins of 1 and 2 lei are made of nickel plated steel and have a silver tone. Those of 5 and 10 lei have a steel core and were coated with nickel and brass, making the coins bi-metallic: silver core ringed with gold for 5 lei and golden core ringed with silver for 10 lei.

Each coin has specific weight, diameter and thickness.

Each coin also has a different rims, to make them more distinctive, particularly for blind people. The rims of the 10 lei coins also have the inscription Moldova surrounding it, each word being separated by a star.

On the back, the coins have a monogram with the letters R and M at the top - symbolizing Republic of Moldova. The monogram is engraved using a holographic procedure, causing the letters to be visible only under a certain angle. Upon the numbers was also printed a micro-etching "BNM".

When the four new coins are put together as a jigsaw puzzle Moldavia's coat of arms becomes visible. The aurochs head being engraved on the front side with:

- the star, princely crown above the horns and the heraldic rose on the 5 lei coin;

- The shield with Ștefan cel Mare's heraldic flag on the 10 lei coin.

On the back, when the coins are put together as a jigsaw puzzle the coat of arms of Republic of Moldova becomes visible.

According to representatives from Moldova's Central Bank, the coins are introduced after an economic research on the usage of cash money in Republic of Moldova and abroad was made.

"The new coins are meant to optimize the usage of cash money in Republic of Moldova based on international practices in terms of currency. Additionally, by replacing small denomination banknotes with metal coins, the expenses BNM bears will lessen" BNM's statement wrote.

While their manufacturing per units is similar to that of banknotes, coins are expected to last ten times longer.