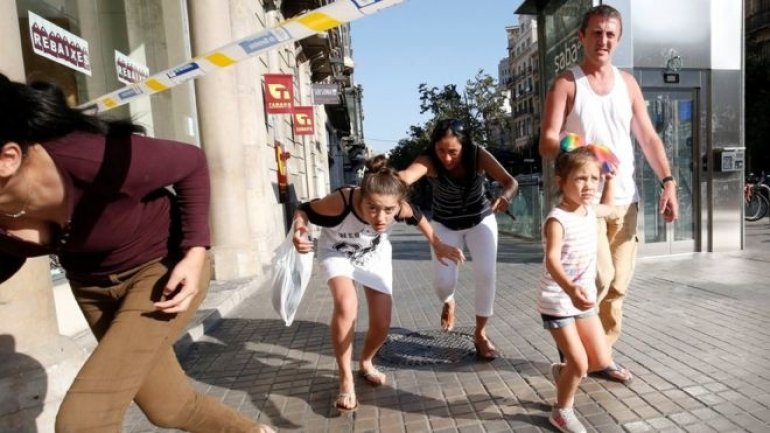 foto: People leave a cordoned off areaAFP Police evacuated much of the centre of the city after the attack/afp
AFLĂ imediat Știrile Publika.MD. Intră pe Telegram

Deaths and injuries following Thursday's bombing in Barcelona are citizens of at least 24 countries, according to Spanish civil protection services. Among them are two Romanians.

BBC writes at least 13 people were killed and dozens more injured when a van hit crowds in the Las Ramblas area of Barcelona on Thursday. Citizens of 24 countries were among those killed and injured, including one Belgian national confirmed to have died. The French foreign ministry said 26 French nationals were injured, including 11 seriously.

Police have arrested two people but are still searching for the driver of the vehicle. Hours later, a second attack took place in the town of Cambrils

In the second attack, a gang wearing suicide belts rammed civilians with a car before being shot dead by police. Seven people, including a police officer, were injured in the attack.

Four of the attackers were shot dead at the scene and a fifth died later of his injuries. Of the six civilians caught up in the Cambrils attack, two were said to be in a serious condition, one critical.

Islamic State has claimed responsibility for the Barcelona attack, the deadliest in Spain since more than 190 people died in the 2004 Madrid train bombs