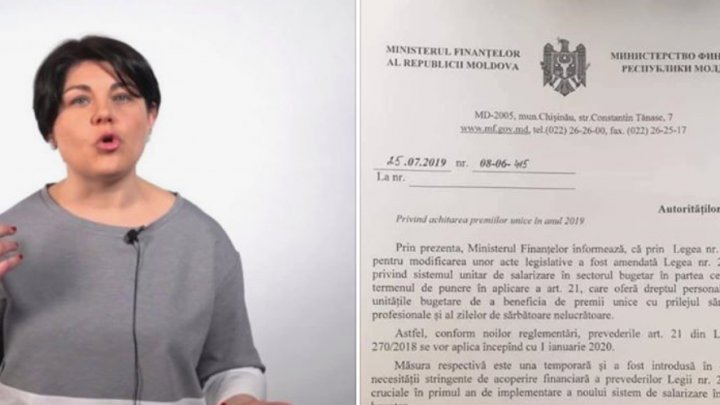 A Moldovan woman who lives abroad is outraged by the Finance Minister Natalia Gavrilita's decision to stop from January 1 the money prizes for the budgetary people.

Minidora Prisacu posted on her Facebook page a critical message to the Finance Minister:

'Most of the Moldova citizens are budgetary. With small salaries and who are working more for the benefit of the state than for their own, citizens who pay taxes and are waiting for the end of the month to take their miserable salary.

Thousands of budgetary people are waiting for some money prizes just to ease their troubles a little...Now, those Harvard graduates are taking away this little joy!

The chubby woman from Finance Ministry, who doesn't know something about Diaspora, took the last money from the doctors, professors, economists and other who were celebrating the professional day and were given 500 MDL to that.

If so smart, why you are messing where is already hard, but don't start draft legislation and concrete reforms to reduce the salaries of 20, 30, 50 000 MDL? Or you're not allowed to? You only have the urge to be a boss!

You know anything regardless the VTA taxes raise and removing the personal exemptions? Show to the simple people of Moldova what you've been learning at Harvard', mentioned Minodora Prisacu.

PUBLIKA.MD reminds that the Finance Ministry announced about annulling the unique prizes offering on professional holidays and non-working holidays for budgetary people.

According to a provision sent tot the public authorities, starting with January 1, 2020, any fund allocation for the budgetary people 'is considered illegal and will be punished'.
AFLĂ imediat Știrile Publika.MD. Intră pe Telegram