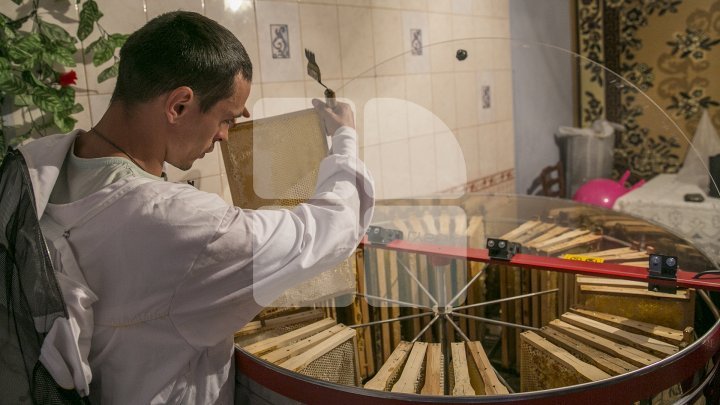 He worked four years abroad, then decided to return home and started investment in beekeeping. Ștefan Cojocari says his dream came true because of a grant of 50 thousand lei won in a competition organized by the Association of Moldovan Businessmen.

Ștefan Cojocari started his business in the autumn of 2016. As none of his family members work in agriculture.

As none of his family made apiculture, Ștefan said it was quite difficult. Now, the beekeeper carries 70 families of bees.

"I decided to invest in beekeeping because honey is a very great product. It was really challenge for me," said Ștefan Cojocari, a beekeeper .

Before collecting the first products, Stefan applied to a competition organized by the Businessmen's Association. He wrote a business plan and with the 50,000 lei he won, he bought a centrifuge, which now helps him with the honey.

"With such a centrifuge, we have the opportunity to pull out about three hundred frames per hour. It's a centrifuge I wanted from the first day I saw it in a person, "said Ștefan Cojocari, a beekeeper.

Thanks to all the opportunities he has had, Ștefan managed to return home from Russia.

"We are very happy because we don't need to work abroad. We can earn good money in our country", said Valentina Doban, Ștefan Cojocari's mother-in-law.

Stefan Cojocari will sell his honey on the local market in Vadul lui Voda. One kilogram of honey bees cost about one hundred lei.