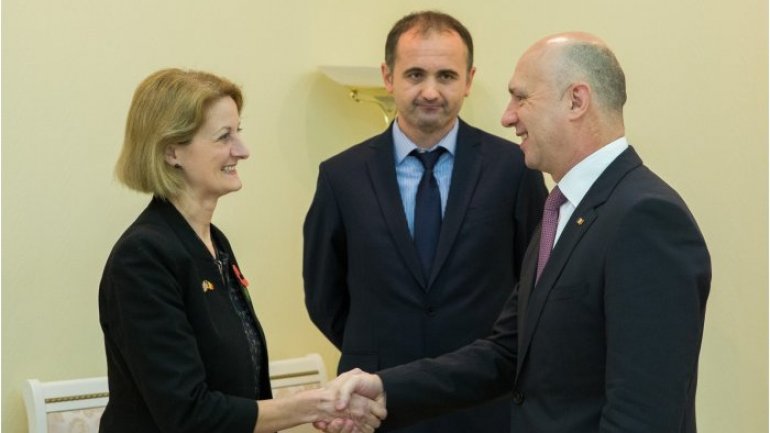 Prime Minister Pavel Filip today had a meeting with Ambassador of the United Kingdom of Great Britain and Northern Ireland to Moldova Lucy Joyce. The officials tackled aspects of the Moldova-UK cooperation and possibilities to deepen the bilateral dialogue.

At the meeting, the PM congratulated the British diplomat on her delegation to Moldova, voicing confidence that this would favorably contribute to strengthening the friendship relations between the two countries. At the same time, Pavel Filip said he wanted the Moldovan society to take over the best English traditions in approaching the human values. “I want the idea of success through work and innovation to prevail in Moldova,” the prime minister stressed.

At the same time, the prime minister referred to the importance to boost the bilateral political dialogue and the trade ties. In the context, Pavel Filip thanked the London authorities for the launch of the Good Governance Fund in last April. Through this Fund, Moldova will get support to reform the sensible sectors, including the fight against corruption, improving the business environment, reform of justice, financial and banking sector, energy area, public administration’s consolidation.

For her part, British Ambassador to Moldova Lucy Joyce congratulated the Moldovan government on the approval of the Agreement with the International Monetary Fund. She emphasized that the British authorities would further back the promotion of reforms and economic development of Moldova.