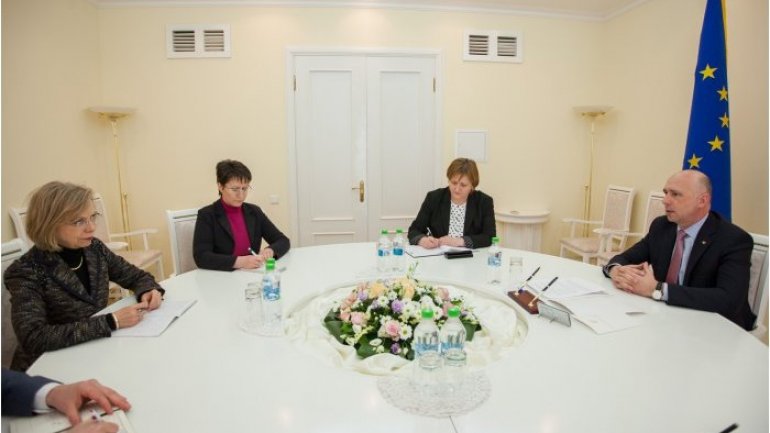 Prime Minister Pavel Filip had a meeting with German Ambassador to Moldova Ulrike Knotz. The two officials exchanged opinions on developments in Moldova and opportunities of deepening the bilateral partnership, Moldpres reports.

In particular, the sides discussed the stage of implementation of the public administration reform. The prime minister thanked the German authorities for decision to back the government’s effort, and respectively, to instruct the creation, through the German Agency for International Cooperation, of a group of national and international experts due to participate in the implementation of the reforms’ agenda.

“This centre will be the heart of reforms’ implementation. Namely here, in cooperation with the selected experts, the reform projects will be adjusted to the best international practices and adapted to the real needs of the society. At the same time, the institution will ensure the monitoring and assessment of the results achieved,” Pavel Filip said.

Also, the PM referred to the completion of the process of reorganization of the State Chancellery, which is the first institution subject to the process of transformation and modernization, in line with the best European practices. The next step will be initiation of the central public administration (APC) reform, of the institutions within the APC competence, as well as preparing the concept of local public administration reform. Filip said the government would continue fulfilling the commitments taken. “We will not change the goals established, we are set to implement an agenda of quite ambitious reforms,” the prime minister also said.

For her part, Germany’s Ambassador to Moldova Ulrike Knotz congratulated the government for the results of the systematic work carried out. She appreciated, in particular, the success of the actions of stabilizing the financial sector in 2016.

The sides also discussed a string of subjects, such as the importance of the strategy of national minorities’ integration, Transnistrian region conflict settlement problem, prospects for re-formatting and unifying the salary payments in the budgetary system.

In the end of the meeting, the officials reconfirmed joint wish to extend and boost the excellent cooperation relations between the two states.
AFLĂ imediat Știrile Publika.MD. Intră pe Telegram